Pond Fishing on the 4th of July

I wanted to get our new house(still under construction) used to having people and laughter filling the interior.

Sweeping and vacuuming the bare plywood floors gave me visions of the future when it will be covered by laminated wood flooring. 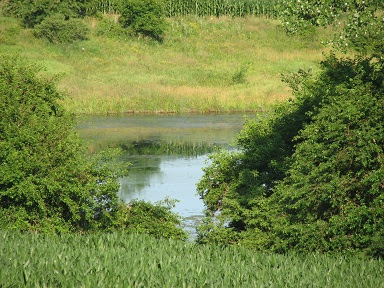 The day was hot, but the afternoon activity included a visit to the neighbor's pond to do a little fishing.

Hubby packed the interested individuals into the pickup to head into the pasture to get a little closer. They didn't really want to carry fishing tackle for a quarter mile with a 6 year old fisher person in tow.

I stayed back at the homestead to pick things up after the Barbecue. Then spend some time visiting with our eldest daughter , her sister-in-law and baby girl.

The entourage was gone for a couple hours.Our granddaughter Alexa who happened to be the 6 year old was quite patient for her age. She is not one to keep at one task for very long. Finally, when she tired of the event she let it be known that "everyone had 5 minutes", then it was time to go back to Grandma and Papa's.

Those who decided to fish were treated to some largemouth bass and bluegill , catch and release was the method used for the day. In all they had 10 hits. The summertime vegetation has become an issue with reeling in the fish. One lure that seemed to  float above the plants was a frog lure, which seemed to get the bluegill going.

Grandson Nick found some success with snagging fish on the pond.

His Uncle is teaching him what he needs to know to catch a fish in whatever circumstance. Uncle Joe is to be commended for being a mentor - doing his part to get  young ones started in enjoying what the outdoors has to offer.

The camera on Nick's phone helped to record  the event so Grandma could see it before the fish went back to swim again...
Posted by CDGardens at 4:02 AM 2 comments: