We often think of ticks as being a scourge in the spring and summer, not so likely come the fall, especially after having some hard freezes in the neighborhood. 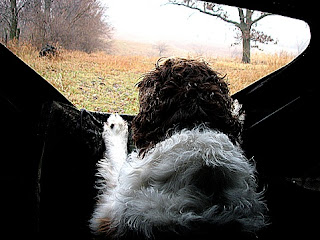 What we have come to realize in the last two weeks here is that ticks are a hardy sort of creature.

Sadie had found two that were in contact with her long enough to embed a couple inches from one of her ears.

I ran out of her flea and tick protection and now realize it was deflecting those little denizens through the worst of the infestation season. Thank goodness!


Not having experienced ticks this far into December I wasn't as vigilante in looking for them after our forays into the timber and pastures. It was only after petting her and feeling an unusual growth were my suspicions aroused. 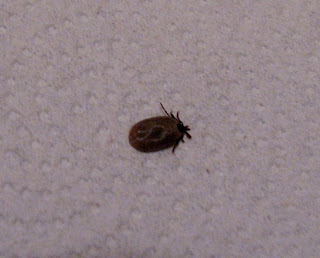 Both ticks were in the larval stage of development in their life cycle when they hitched a ride. Larval and nymphs each must take a blood meal to develop to the next stage. Larval ticks, known as “seed ticks”, can be distinguished from nymphs and adults because of their small size and six legs. My reading at an Iowa State Extension publication seems to indicate this variety is the Black Legged aka Deer Tick.

It is my belief that our relatively warm temperatures have extended their reproductive capabilities - which could create bumper crops of the little blood suckers next year.

So, even if your weather has reached some extreme cold temps beware the little hitchhikers if the days return to the balmy upper thirties as it will here in central Iowa again come the weekend...In time for Iowa Shotgun Deer Season II Saturday, December 10th - Sunday, December 18th.
Posted by CDGardens at 5:25 AM 2 comments: