From Morning 'Til Night 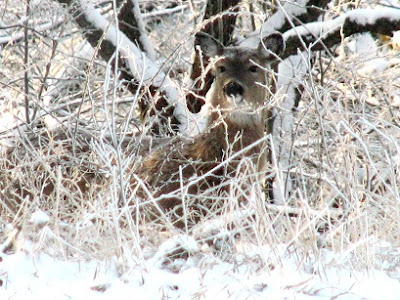 The morning started off with a fresh layer of snow on Monday the 5th, and the deer were foraging around the backyard looking for acorns.

Several individuals were caught on camera, but my imagination led me to envision this particular doe thinking,"Shhh, maybe if I hold still she won't see me", as if the wisps of ice laden weeds would add to her incognito mode. Definitely a smile maker as the sun came up for the day. 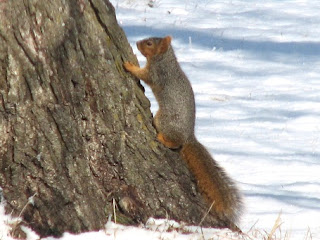 Deer weren't the only ones looking for food. Squirrels were in the front yard... Squirrels in the backyard,  kept Sadie on alert at the windows. Those little critters have been harvesting acorns off the ground consistently since the drop last Fall. You would think by now with all the acorn eaters in the neighborhood the supply should be exhausted; apparently not. Their tunneling skills has created a symbiotic relationship with some of the birds when it snows - the squirrels loosen the snow for the birds to reach the ground.

After lunch ,walking down the drive to get the mail led to dodging mud, and running water, as the sun heated up the ground.

The return from the mailbox took me to the trail camera ; then a visit to the fence line nearest the neighbor's pond. I was out to catch some migrating birds again.

Standing, watching the birds gave me the chance to watch flocks on the move. A few dropping onto the pond in front of me. 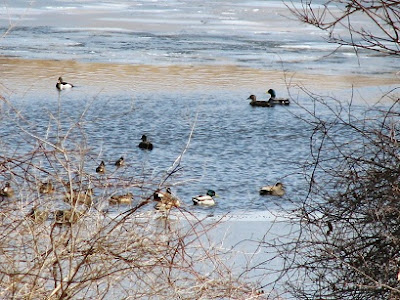 This group of Mallards took off, circled to get into formation, and headed for another pond in the next field. 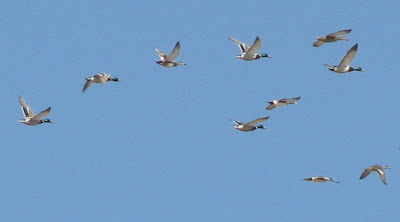 I stayed around for awhile to watch a bunch of Mallards return over the pond,  they didn't take time to drop down to the surface. It became apparent to me why they were  agitated, and headed away in an extreme hurry towards the Marsh, an Eagle was in close pursuit. From my vantage point I didn't witness any close calls.

This day started around 4:30 A.M for me....heading outside for the first time I watched the moonset;  I tried my skill at catching it before it  totally disappeared below the horizon. No success at that time as it slid swiftly away.

In the evening Sadie wanted to get some time outside as the sun was setting, deer in the field grazing, geese in the air looking for a place to set down; all spurred me to get camera in hand once again.

My attempts to catch the moon led to different settings ,with the best exposure on automatic this time around.

The Canon PS3 IS camera I use has moments when it performs well outside of its capabilities. At those times I can only give God the credit; must be the picture he wanted me to get.