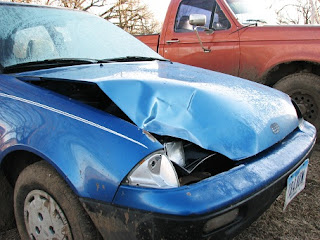 We keep hearing about cars finding themselves on collision courses with Whitetail Deer on commutes in and around our capitol city, Des Moines.

The rut is over, but for some reason the deer haven't realized they don't need to be in a rush to run across the road in front of the headlights, or for that matter just stand in the middle of the road.

The other night my Hubby arrived home with a new crinkle to his little Geo; his Whitetail collision occurred just roughly 1 1/8th miles from home.

This is his third encounter over a fifteen year period. The first encounter happened during the mid-day, clipped a side mirror off our Honda Accord, the second event took place July 16th, 2008, and left a calling card on the hood,scared the poor deer, most likely to death. It happened after dark in the fog...

The present situation occurred as the sun was setting low. So we weren't able to find the animal in the ditch on our return to the vicinity, darkness covered the scene. I did see some deer standing at a fence line and should have taken that as my cue to where we needed to look.

Morning revealed the location and the state of predation of the unfortunate occurring in less than 12 hours. It makes me wonder who found the deceased first...Coyote,Bobcat, Eagle, Hawk???

Hubby was lucky that the radiator and drive train of the car weren't damaged. He had another hood that fit, but will need to get a headlight shroud, and turn signal cover to get things back to normal.

We are grateful nothing more happened...
Posted by CDGardens at 2:38 PM 4 comments:

At 2:00 A.M. Sunday morning, March 11th, we will be finding ourselves with one less hour of sleep. Time to move the clocks up to get us started on longer daylight hours to work and play.

I am certainly getting into the Spring part of it already...
Posted by CDGardens at 2:26 PM No comments: