Trip to the Berry Patch Farm

The last few years I kept making idle threats that I would go to the local "pick-your-own" strawberry patch about 16 miles from home to get some sweet June berries. However, other things always seemed to get in the way. Well, this year I wasn't going to be satisfied with my excuses of one reason, or another.

Earlier this Spring,just as the berries were blooming, central Iowa experienced a hard freeze. The farm owners used a method frequently used in Florida when frosts drop in to steal away the orange blooms. They implemented a water spray to create a layer of ice that would insulate the plants, and create heat when it melted off after sunrise.

Picking at the farm started the last week of May, unseasonably warm temperatures have matured the crop, and according to Judy the strawberries may be done for them by this coming Saturday, June 5th.

Rain dotted the radar in the vicinity of the farm as I gauged what my schedule would become. Arriving at the farm you could tell there had been a shower,but nothing excessive to detour the seekers of seasonal delights. 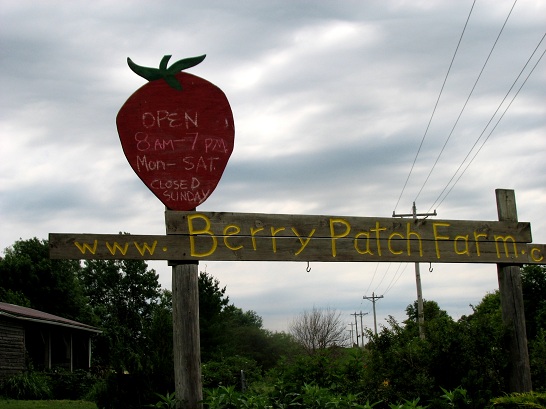 The Berry Patch Farm, owned by Dean, and Judy Henry, has been around since the early 1970's.

Dean, a retired horticulture teacher, found his next endeavor to explore,experiment / implement new food cropping methods to increase production. The Henrys may not be totally organic producers... However, they do use practices that reduce the need for excessive spraying of pesticides and herbicides. 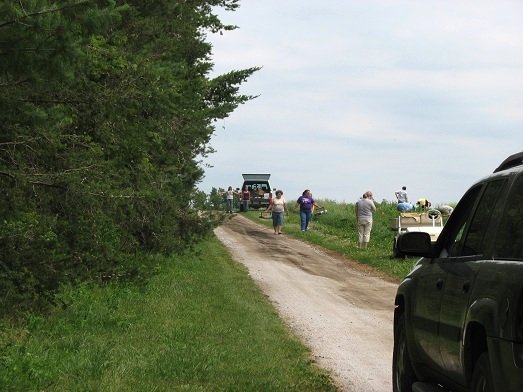 They allowed parking out by the field to be harvested. There is a young lady,an employee, up by the open tailgate of the white pick-up motioning for drivers to come park right across from them. She had moved there after I came to indicate to others where the starting place would be for the new arrivals.

I had just gone back to the car ready to go back to checkout when I got these pictures. 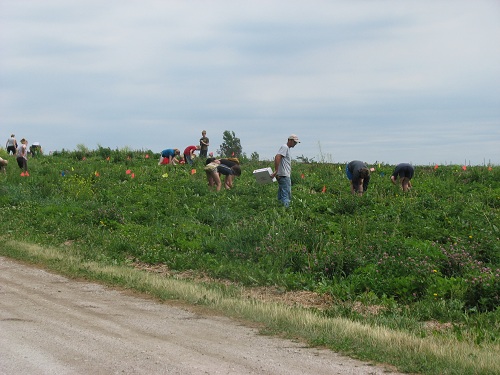 The field was becoming busier around 11:30 when the threat of rain had diminished to nothing. A pleasant day to be picking... 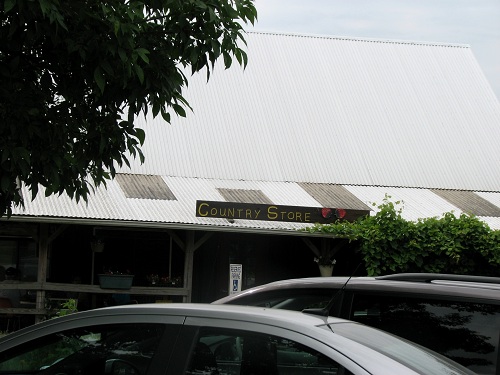 The Country Store has a porch where you can stop and sit a spell. You can even find a few extra plants they have for sale lining the walkways .. 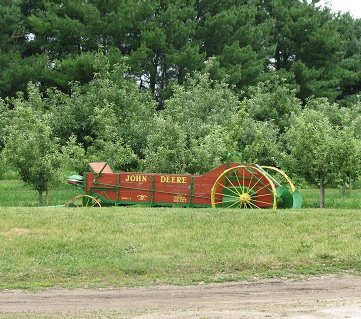 A collector's piece used in a by-gone era. Certainly a conversation starter for an older farmer from back in the day... 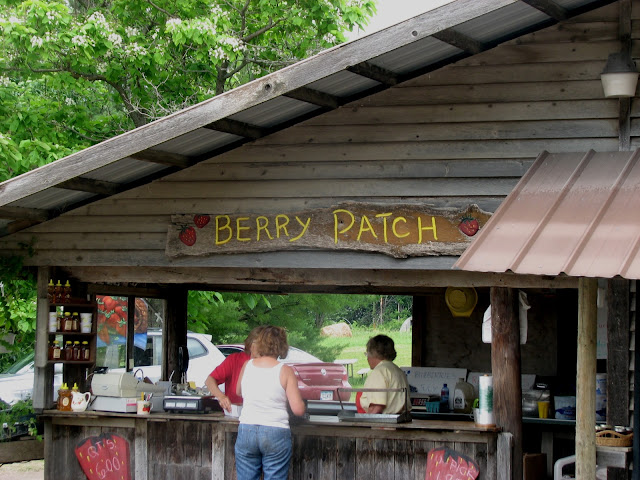 Judy the co-owner,behind the counter in the yellow blouse, was getting ready to count out some strawberry plants I purchased for my own garden.

After ordering strawberry plants a couple of years in a row from a catalog, and having them arrive too early, not being able to keep them alive until the weather cooperated -  led me to another solution. Buying the starts locally became my logical alternative; ready when the weather was just right for the planting.

Strawberries weren't the only plants available; I found some blueberry plants too. Two of the three blueberry bushes had bloomed and carry some little blueberries. Now, if I can only get them to maintain through the heat that is forecast for this weekend. Time will tell.

Other crops that the Henrys grow -Apples, Asparagus, Rhubarb, Blackberries,Blueberries, Currants, Gooseberries,Pumpkins, Raspberries, Rhubarb and Strawberries. They definitely offer an abundance of fruits and other foods that most of us don't have the room, or time to grow.

I had the honor of sharing conjoining market space at a local Farmer's Market with Judy, and Mike, the Henry's son, when I attempted a start at growing vegetables for others back in 2001. I still start plants, and grow vegetables; other things have influenced the time I spend pursuing those interests.

Thanks to the Strawberry Patch Farm for the extra effort this Spring  to provide the opportunity to get some very good Strawberries!
Posted by CDGardens at 8:00 AM No comments: