Deer on the Hill

Iowa has been seeing some warm fall temperatures and the white-tail deer crowd has been slow in making their mass presence known here at Timber Life.

The trail camera started seeing some early increased movement the last of August with a small cool down , it didn't last. Things warmed up again and  water sources continue to be dry due to our drought. 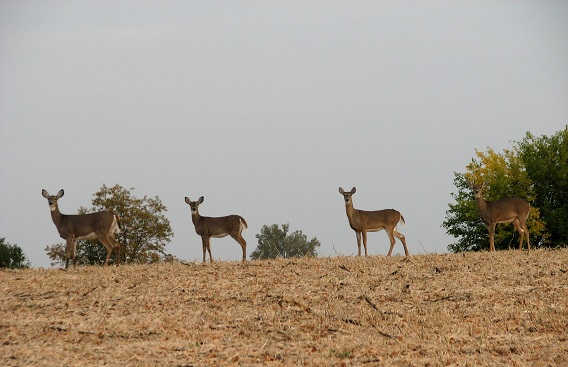 One day this past week, on my return trip from gathering the trail camera card, I was greeted by these girls standing like statues while pausing on a make-shift  path through the harvested beanfield. I believe the dominant/grandma doe is standing in the lead, then great-grandaughter, grand-daughter, or possibly a second daughter, and a daughter following up at the rear of the line. A purely speculative thought, but sizes do seem to support that hypothesis.

My mind jumped to a post I had made in July of 2009, about the generational  home range of the White-tail  family groups.


My presence didn't seem to create an immediate flight response, but a curiosity. Our stare down lasted for quite some time. 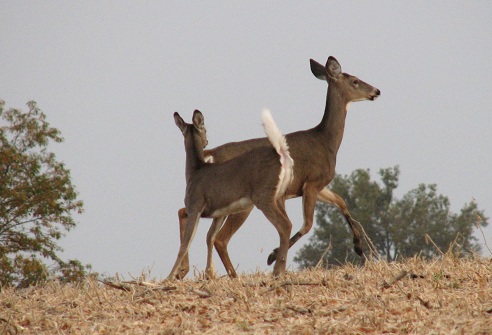 Eventually, since I didn't move along, they became uncomfortable and the chain reaction started within the  group. The dominant and youngest does in the group felt intimidated first. 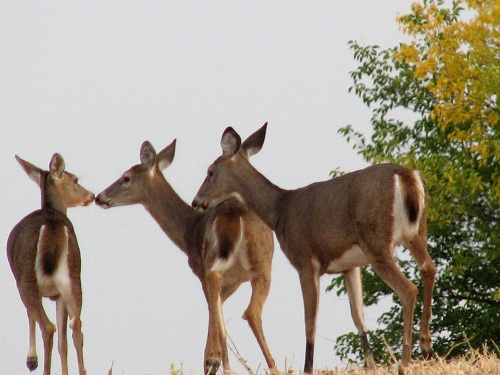 One of the most common modes of communication I witness is the muzzle to muzzle.


The others had already taken off for a more sheltered situation, so, the last in line shifted into high gear to make up for being left behind.

As the cold fronts continue to move-in, I expect to see the deer return in grand fashion for we are what you would call a "winter deer yard". Looking forward  to seeing what might be wandering passed in the days ahead...