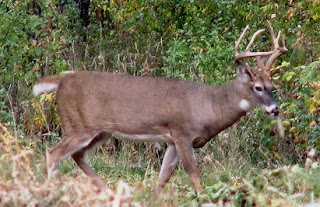 Since I had a successful hunting experience last December... I've taken time to check to see if I could locate my buck among the pictures filed away on my computer .

Flipping through my digital pictures, I searched to match up the right hand side tines of bucks that had passed my trail camera, or my digital, having chances to catch them as they found their way around my neighborhood.

This is the Whitetail Buck I had the privilege to harvest with the help of some neighbors.It wasn't until finding these pictures that I had a better idea of his age. I would place him in the 2 1/2 - 4 1/2 yr.  old age bracket. Wide range I know, however, exacts aren't my forte. 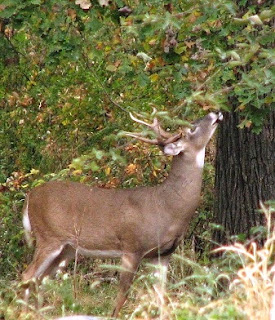 He was taking time on his way through to leave scent behind as he rubbed the lowest branch of the Bur Oak, one of the main backbone trees that provides shade and food for wildlife in this timber.

Another thought  coming to mind would be that he was checking scent that had already been left prior to his arrival - since he was not the only buck active in this part of the woods. 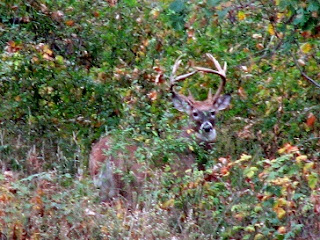 Shortly after getting the picture above he turned back looking at me head-on from the edge of the timber via an escape route.

His left G5 tine resting on the right G4 of his rack when it was intact. The hardened G4 shows where the G5 nested after full development post velvet stage.

Using the pictures I was able to get a tine count...the total was nine. 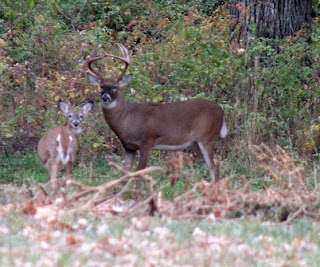 The light was getting low in the fall evening hour and my  camera was having troubles catching the rich color of its surroundings.

The quality was compromised in order just to get the models  standing before me. Adjusting a few things in my photo-editing program I was able to produce a picture that would pass as a portrait for my  personal remembrances.

I didn't remember this guy the next time I saw him in the moment of the hunt, as he ran up the deer path behind me in a panic on December 3. 2012. He was missing the left side of his rack and  leaner in his physique. It is totally conjecture on my part  but I had him losing it to another buck in battle over a fair doe.Not difficult I'm sure since it has such a palmate curve at the top.

The days were starting to have increasingly cool evening with fronts passing around sunset - providing some fantastic moments to stop and watch as dark overtook the light...

Posted by CDGardens at 5:07 AM No comments: