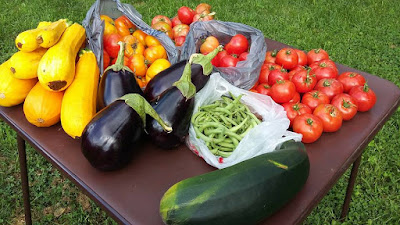 Last year I had a great year for garden produce in the Garden of Eatin' ,after not seriously planting a garden for years it was a wonderful reward.

Although a challenge  came in July, when I came down with a Pneumonia like respiratory ailment, I continued to harvest and share what the garden provided.

The planting season of 2016 allowed me to have most of my harvesting done  by early  September...I had bunches of pumpkins,and varied squashes as the year of plenty came to a close.

This year, I've had somewhat of a setback for getting things accomplished. Timing  and the determination to get things haven't always gone hand-in-hand.

I did find some great looking tomatoes and a calibrachoa to plant at Victorian Acres  south of Adventureland in Altoona. 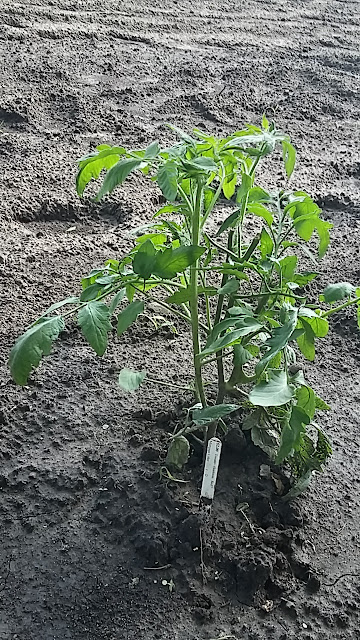 Pictured to our left is an Heirloom Tomato variety called Mortgage Lifter.

It is a Beefsteak variety that can reach up to 2 lbs. per fruit, an indeterminate plant that sprawls to nine feet.

The developer of the breed is said to be Willam Estler of Barboursville, West Virginia, in 1922, but not register by him until 1932.

Questions have been raised about whether, or not Mr. Estler was  actually the developer, since some sources of information attribute  development to M.C. "Radiator Charlie" Byles in Logan, West Virginia in the early 1930's. I've heard it became a form of income during the Depression. Possibly another questionable fact passed through the generations?

I'll have to let you know at a later time if I get a harvest.


I planted 6 tomatoes in the garden,4 in cages and 2 left to sprawl,all of them have constant prunings that will probably continue as the new growth emerges.

Then planted to the right of the caged tomatoes were 3 - Eggplants, and 8 Pepper plants. Yesterday, 1 Eggplant and 4 Pepper plants still are rooted.

To the back of the garden I planted green beans.The green beans have been nibbled down to the junction under the first set of leaves after reaching what appeared to be a promising future. Harvest not expected....

Many years ago I manufactured my own tomato cages from concrete reinforcing wire. I had been disappointed by the ones provided in the retail establishments. Now, I can have healthy TOMATO PLANTS. 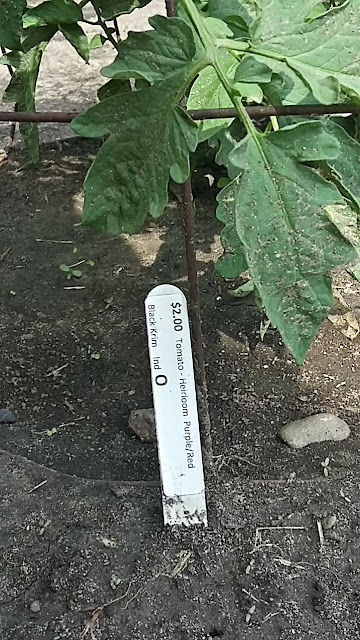 One of my favorite tomatoes now is the Russian Black Krim.
It's one of those items that was introduced to me by another person who found it to be tasty. My Mom always was trying things...I saw it advertised in the Heirloom  sections of the seed catalogs, but of course taking that step to try it only came after some produce sampling and encouragement from one who couldn't grow it on her own.

It is a dark fleshed, firm, sweet fruit and well worth a try if you aren't familiar with it already. 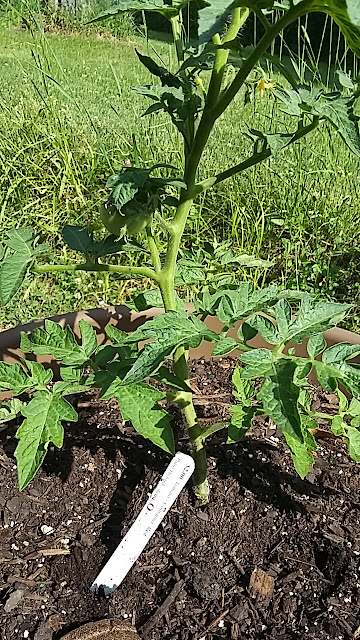 I continue to look for a possible tomato harvest from the interior of the tomato cages and as a backup, a potted plant.

Not to give total authority to the denizen of the Timber I planted two pepper plants in pots as well.

Here's wishing you all, "Have a Great Day!"
Posted by CDGardens at 7:31 PM No comments: