A Visit To The Collins WI Marsh Wildlife Area

As I ponder about events I've experienced, documented in my picture gallery, it is without a doubt time to start speaking about what went on during those days. In a couple of weeks it's almost two years since my husband Corey and I had the opportunity to visit Wisconsin during AirVenture 2018. 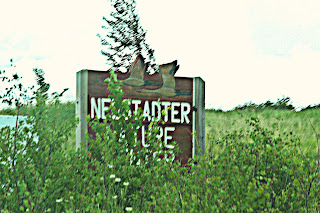 I'd like to revisit Thursday, July 26,2018, when a drive through the countryside took us from Appleton through many little towns to arrive at a destination once visited by Corey back in July 2016 with some friends.

We drove by the Neustadter Nature Center sign and looked up the information about the area. If you click on Neustadter above you'll be treated to an Osprey Cam...So much Marsh acreage brings varied wildlife to be observed in many different ways. If you are a kayaker, they are available to be rented at the Nature Center, there are trails for Hikers and an Observation Tower to oversee the surrounding territory. 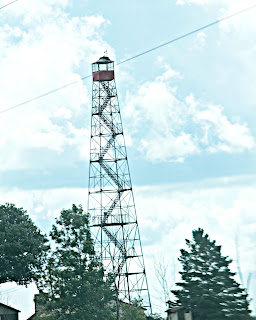 Our decision not to go into the Collins,WI Wildlife area  and Marsh took us instead by the Neustadter Nature Center headed in the direction of Manitowoc. Collins Marsh is a 4,200 acre state wildlife area located just 20 minutes west of Manitowoc.


On this road, one of the first things we saw was a retired Fire Observation Tower for this Fire District.The Observation Tower is  110 feet tall open to the public free of charge. The top of the tower allows visitors a beautiful vista of the surrounding countryside. An Osprey couple have decided to make the top of the tower a nesting spot to raise a family this season.

I've seen Fire Observation Towers in Colorado,  South Dakota and now I can add to that list, Collins,Wisconsin. 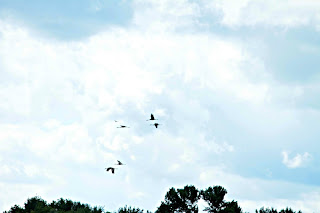 I'd been told by Corey that the Sandhill Cranes might be visible to us in this area since the entourage in 2016 had caught a few on camera during their trip.

July26,2018 was the first time I was witness to these large long legged birds...I was excited to see these Sandhill Cranes come flying in , making a long turn to come back onto the field where there was a larger flock of birds already interacting with each other on the ground. 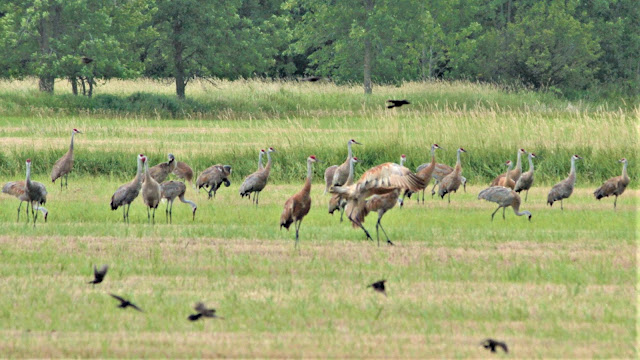 I was definitely in awe of the scene that lay before us here in Wisconsin- being made aware long ago about the migration of the cranes through the Platte River Region in Central Nebraska from February into April each year. It has now become a very popularly organized tourist industry for that State.

After seeing such a large group of cranes together I was on the lookout in every field we passsed along our travel route that day. I did see single couples once in awhile but you had to look fast since highway travelers don't have much patience with drivers not maintaining the speed limit.

The next post will be of our stop in Manitowoc... 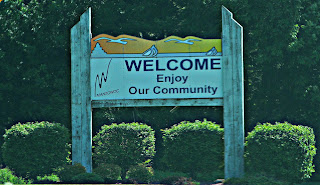 Until then have a Great Day!


Posted by CDGardens at 5:17 PM No comments:

Thank you for stopping into Timber Life to see what's going on today...I know I've been speaking in memories the last few days because I didn't get a chance to relate my experiences at the time of my visit back in 2018; all my information  wasn't conveniently at hand. 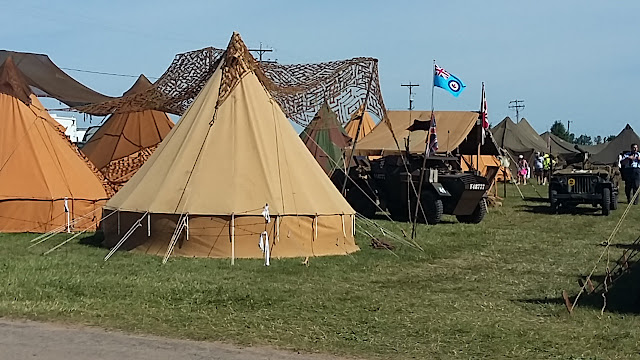 On this day,my second full day at AirVenture, it  was already hot and humid by 9:46 A.M. as I walked from the Replica Fighters Association Headquarters down passed Fighter Town  on a reconnaissance mission Wednesday morning July 25,2018, my opportunity to checkout the M.A.S.H reenactment village . 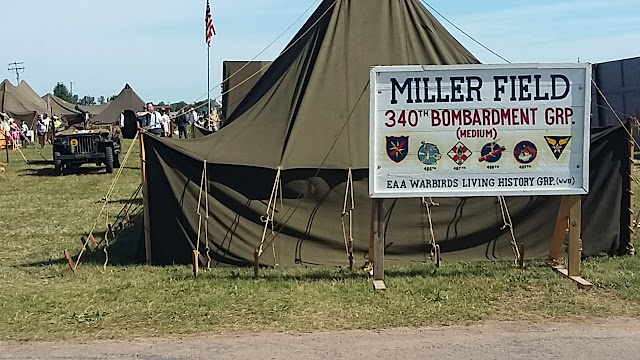 I must admit I didn't go into the village because I was still recuperating from my respiratory difficulty and just wanted to get some pictures to add to my recollections of a past era in our country's history. 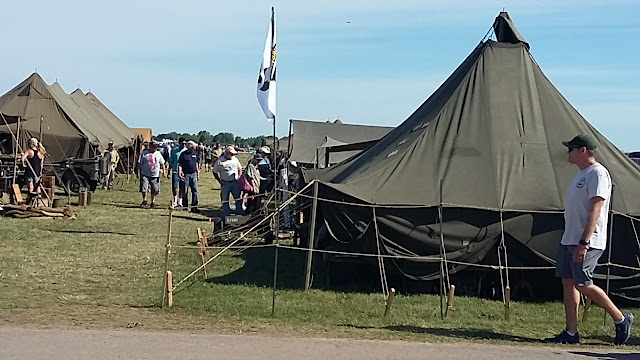 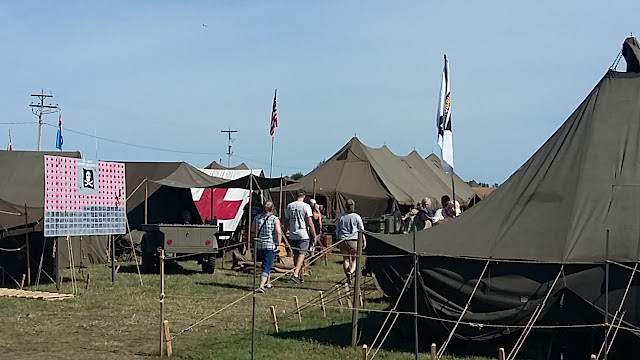 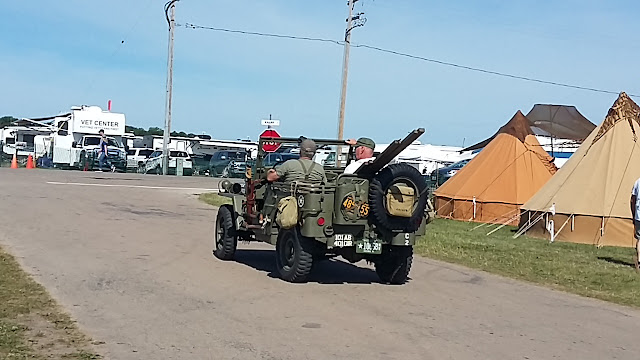 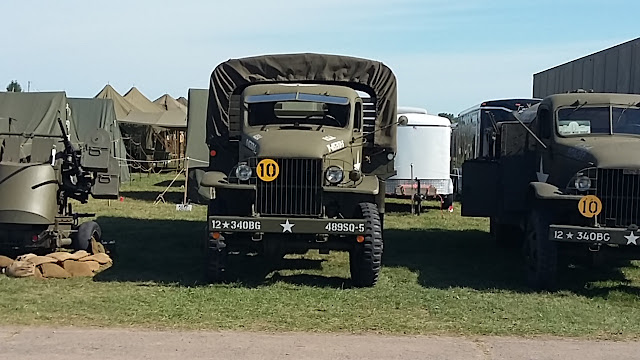 I shed a few tears as I stood in front of these trucks ...Who knows maybe my Dad had something to do with them in their time in history? I experienced some acknowledgements of passers-by in my expression of emotion as I stood taking pictures. Thank you for your acknowledgements if you should happen to read this little blog post. 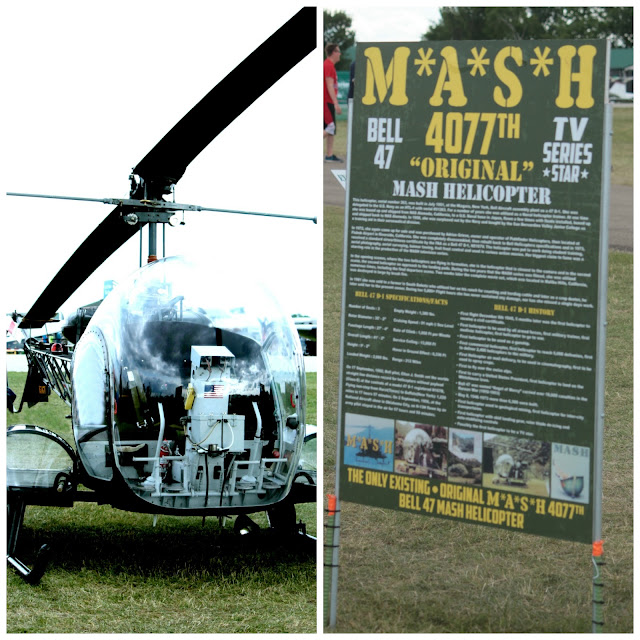 Remember M*A*S*H the television show that captivated audiences for nine years? It was on my evening watch list in it's first run and occasionally I catch it now for nostalgic purposes.

The aircraft above was used in the award-winning M*A*S*H television series and  is a Bell H-13 Sioux, the U.S. Army equivalent of the Bell 47D-1.  The helicopter that flew in the television series has a history of being converted to an agricultural field sprayer before being refurbished once again for display at Fly-ins.

Traveling Back in History 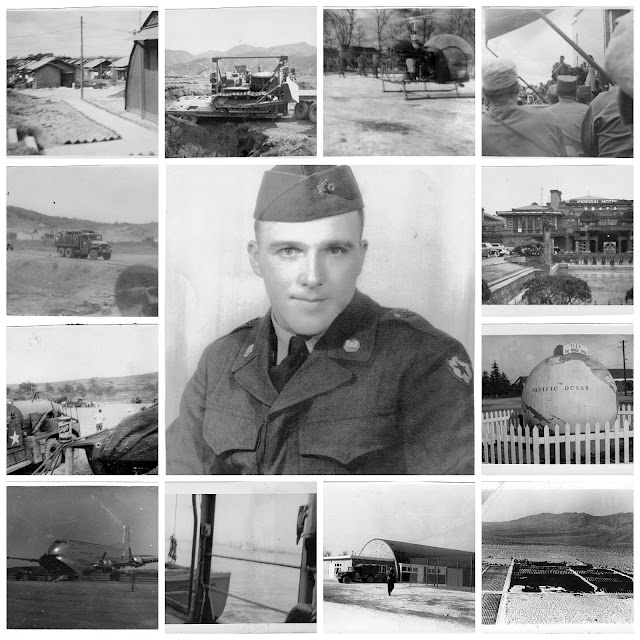 My Dad, John Koenig ,served in the 74th Engineer Heavy Equipment Company,APO 301 in South Korea. I hold a few of his letters and pictures home to his parents in the archives of his experiences...

Please check back for more of my memories of explorations of towns and countryside around Oshkosh during AirVenture 2018.

Until next time...Have a Great Day!
Posted by CDGardens at 2:12 PM No comments: