Honestly, I tried a couple of days ago to get a blog-post typed across the page. I wasn't able to get it accomplished for some reason or another. Excuses! Excuses!! Don't you know? ( said with a wink)

Today, I have something to say on a topic concerning this minute part of the world I occupy. Could be I'll have a  thought to interject into the online community that we might sit sipping coffee and discuss if we actually saw each other face to face.

Are you ready?!? I've got my coffee in hand. Is your coffee cup filled?

As a resident of Iowa I have been apart of  potential Republican Presidential candidates mailers, television commercials, and yes those DREADED telephone phone calls...even my cellphone. What I learned to do was let the answering machine take our calls, and if I didn't recognize the number on my cellphone it too went to voicemail,if they left a message.

We had quite a field of individuals from which to pick and choose just one in which we saw the leadership qualities we valued. The decision making process came and went this evening.

It had been several caucus cycles since I had participated at our precinct. Attendance to the event was  positive in number, entirely filling the room at the community center where Hubby and I go. They say this year totaled 186,000 souls strong Statewide increasing by half since  2012.

The candidate that finished first at our precinct was not the one who took the state as the first choice. I have a feeling that there are going to be questions once more on the way our selection process works in counting ballots and the way in which the results are reported.  The media brings stirrings of unrest by those who feel themselves slighted in the end tally.

We will have some interesting months ahead until it has been decided who will be put on the November ballot.

Onto the next subject... 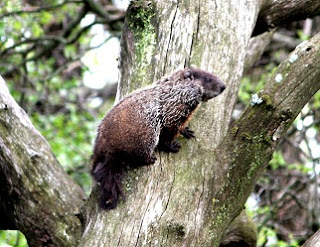 While working on ideas for my previous paragraphs I heard that Puxatawney Phil was not seeing his shadow and had optimistically prognosticated that Spring would be coming early. Keep your fingers crossed!

Sorry, I couldn't find one of our Ground Hogs lolling about in the snow...to add some additional prognostication from Iowa Timber Life Tim. I would have whispered with certainty into the little rodents ear for him to share that Spring will arrive in six weeks time. 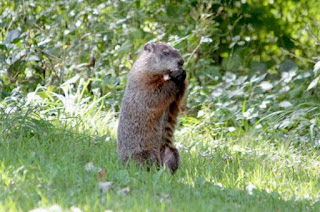 We are accustomed to having Groundhogs waddling around here. They speed up trees or down holes if me or the dog happen to get to close.

The Groundhog is the largest member of the squirrel family and has a diet of  hickory nuts with a side of flowers or garden greens. According to my  observations

outside;either relocating at a distance to a den or burying them in soft dirt close by. I usually see only one at a time, unless a mother is showing her babies the best places to sleep and eat.They are entertaining until that salad they ate happens to include the roots of a special hosta I adopted from a family member. However, I have learned patience because they are another animal  species that has lived here longer than us...

Have a blessed evening!


Posted by CDGardens at 7:40 PM No comments: