Monday morning July23rd came into view and we headed off  from Appleton towards our day at EAA AirVenture 2018 to meet some of the guys at the Replica Fighters Association Head Quarters.

Of course Corey was a well known member of the club being editor to the group Replica Fighter's magazine and he introduced me to a few other club members present when we arrived.

The front porch of  Headquarters became a forum in itself. We sat discussing airplanes, past and present projects, as well as EAA group endeavors  to keep the art of amateur builders engaged into the future. How is your EAA group being challenged? 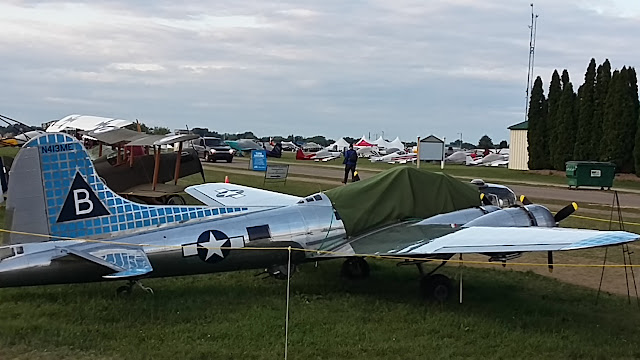 One of the most notable draws for Homebuilders during the week was that of the Bally Bomber.

We at the Replica Fighters Association were privileged to have the one-third scale B-17 Bomber, parked right outside the door. Most of the time people were milling about with everyone trying to get interviews and pictures of builder Jack Bally and his support team.

However, I was around in the evening after the crowds dwindled and the Bomber was being put to rest , preparing for another day. 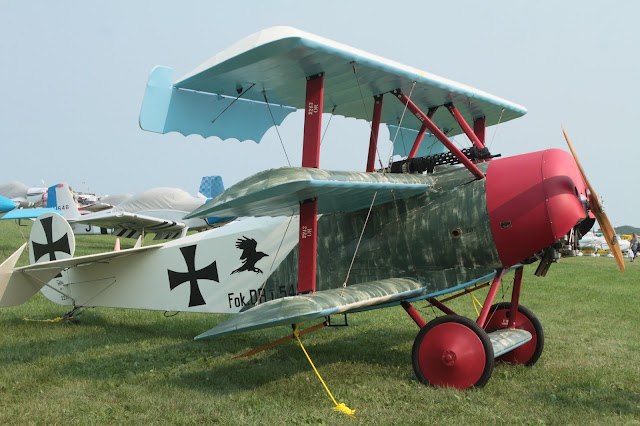 There were several WWl planes on display  at the Headquarters during the week. Among the displays was this WWl Fokker Dr1 triplane owned by William French. He was given the "Best WWl" award at the Club Barbeque on Friday evening July 28,2018. 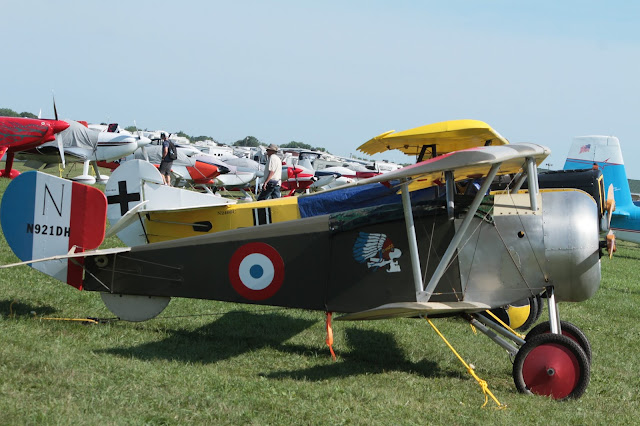 My aviation interest spans many genre of planes, but of course WWI happens to be a favorite since Corey and I own Voisin 3/5. A design incorporating two different models of the French built Bi-plane Bombers.

I've heard  Corey speak of several individuals during his past encounters with gaining information on building and attending events where you can walk up to the plane to examine other builders concepts of a designers plans. It was my pleasure to meet a bunch of these people at Oshkosh...including Dick Hartzler owner of the Nieuport 17 and the owner of the "Fat Fokker"DVII, Daryl Porter both having used Robert Baselee's Airdrome Aeroplanes for their supplier .  We used the porch of the Replica Fighters Association to chat about what life brings to those in the serious pursuit of aircraft building and flying.

In the afternoon Corey and I headed off to do some EAA merchandise shopping and ended up with a couple of T-shirts to commemorate my first Airventure and hopefully the start of a venue of exploration. One can always learn something new!

Next on our agenda for the afternoon was the daily Airshow. I had a great time photographing all the speeding jets, bi-planes and cars provided by Ford, now a sponsor for activities at EAA Airventure held in Oshkosh, WI. at Walt Whitman Field.

Once the Airshow was completed it was time for us to head back to our Hotel to relax and cool off...

Stay tuned for day 3, I hope to be back sooner than the last post.
Posted by CDGardens at 5:48 PM No comments: