This past summer I had a suggestion made to me from my hunting mentor who brings wild game for my table, about what I could do with a patch hand seeded a year ago with deer plot products. There were some perennials rooted, but not enough to thwart the weed population that had a good foothold. I am not a proponent of chemical burn down, nor do I wish to plant GMO seeds.

A great organic cultivation method that was implemented to eliminate the biggest share of weeds was super heated, dry soil turned over with a disc once,left to sit a week ,or so before it was disced, and planted with turnips the middle of August.

The plot had previously been used by a cropland renter a few years for a small addition to the adjacent farm field. However, more times than not the crop was pre-harvested by our wandering wildlife. Certainly, no pay back on investment of seed, time, machine fuel, etc...

I didn't find the giant foxtail that proliferated in the patch this past season to be a total detriment to the location.

Observations provided information of deer bedding, trails passing in all directions, and they fed on the sparsely sprouted clovers, knocking down the surrounding foxtail. Having walked the patch many times,and hunting out of the giant  foxtail, I found glacier planted rocks of various sizes scattered over the surface, a few of those were also translocated to facilitate a smoother surface for us two foots to traverse. 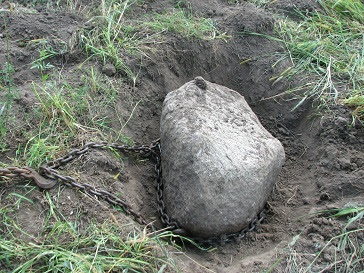 Farming over some big buried rocks brought them closer to the surface during tilling.

I finally  had enough with one that was very evident; so I took some measures to move it totally out of the way.

As I moved the soil around the  perimeter of the rock, the shape reminded me of a tooth.

My mind started playing with the paralells between my activities, with a child's experience of losing their baby teeth. Admittedly the technique I needed was a bit more heavy duty to get the geo-dentistry accomplished. It took a few tugs to get it lifted up and out of the hole.

After I let my mentor know of my accomplishment...he mentioned there was another rock further on that made the disc jump out of place when he was busy tilling. I will look into it next spring when it's time to think about preparations for planting once again.I haven't seen that one yet.

We haven't had an abundance of moisture, but the turnips have turned out really nice. The variety that was planted is human friendly. I have raided the patch a couple of times for myself, and then a couple of times I found some for people I know who didn't have some to harvest of their own.

Now, the deer and turkeys can join in  harvesting the greens and bulbs to supplement their diets.

Cold temperatures keep popping up. Soon the grass may go dormant, the deer will lose one of their last nitrogen sources that I see them dining on as they eat outside my window. I wish they would pay more attention to it during the summer when I need to mow it to keep it in order. I should be thankful they have a head start on next season. 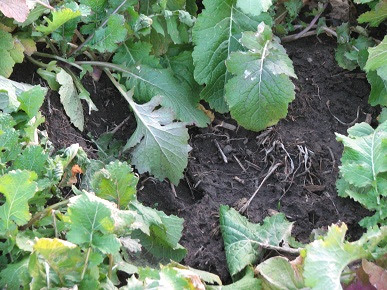 On our last visit to the "Turnip Patch", I saw evidence of some nibbling going on, an encouraging sign since this would be my first time to have such an opportunity as this to see just how they will react.

Eventually, I want to plant perennial deer plot mixtures in this area.

I have become acquainted with the Whitetail Institute forage products  in my sample plots - the imperial clover and mixtures with clover and alfalfa have been a great draw. This year was the first year that I saw the deer actually pay attention to some chickory...could be it was a source of moisture for which we were greatly lacking.

I am excited to see activity even if it isn't first hand at the moment.

My trail camera has been keeping an eye on another location where another addition to the Timber Life list of animals has made itself visible.Check back for more to be shared on that subject in the future...
Posted by CDGardens at 5:00 PM No comments: