This Timber Life  blogpost is in support of a Facebook post by the builder of Voisin 35, Corey Butcher... 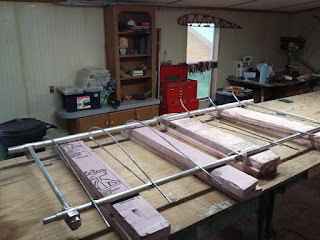 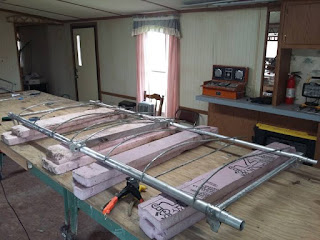 All four wings are ready for final cleanup and cover. Hope to start on that sometime in June.

Here are some photos of the top center section. I thought I had it ready to go, but I decided to make a slight change. I don't like the center compression plate with separate halves. (This is not the way the plans are. It is a left over from the prototype.) 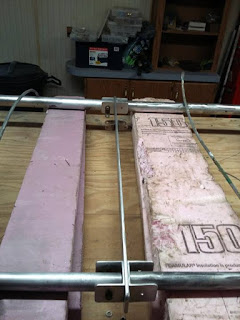 You can see it in the third photo. So I am going to do a little bit more modification here. I'll detail it later.

Thank you for stopping by Timber Life, more Voisin 35 updates on the way.

Have a Great Day!
Posted by CDGardens at 4:22 PM No comments: 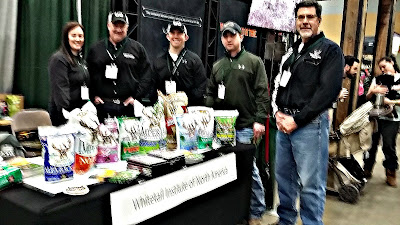 Thank you Whitetail Institute of North America Staff for doing an impromtu picture at the Iowa Deer Classic 2017!

It had been some years back that I purchased some seed samples for mini-plots at another Iowa Deer Classic. You can find my growth results written  here on September 2, 2010.

I'd done some research on the Whitetail Institute website about their soil sampling kits...Since I've not personally had our soils tested here at Timber Life, I wanted to verify some information I had classified by reading.  So, this year instead of buying the tests online I found the booth...I bought two of their limited supply.

The tendency of our Timber soils indicated to me a sour disposition with all the vegetation pointing in that direction. Makes sense,right?!? I had an idea of how negative the pH balance was by the specific plants that were flourishing, but to provide the proper environment to unlock the nutrients for a balanced diet for Man and Beast, I needed to do the soil test,to have my own results. 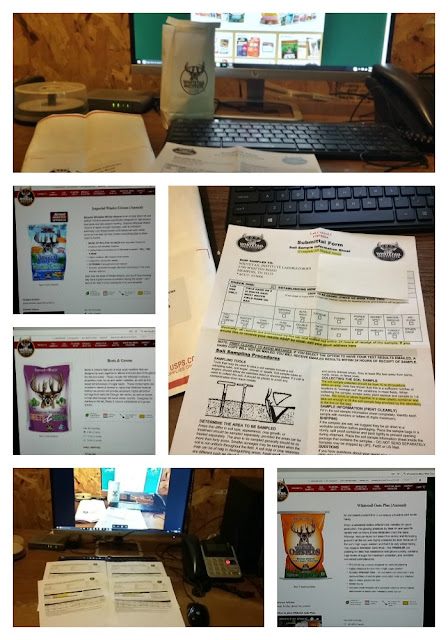 I sent in soil samples from two different spots on our property to get an idea of the pH range I could expect to modify.

To find specific results some preliminary seed possibilities, just to get an idea of what would be needed was required.

Weed populations have increased over time on my plot...They are being addressed.

Purple Top Turnips, used for human consumption was also implemented for Whitetail Deer and Turkey here in the past. The produce became sweet after the frost and a well consumed food source. You could say they, cleared the patch,eating it down to ground level.

The annual seeds shown are those  I might consider for planting for a fall crop after the weed population is under control. Then it will open up the potential for a perennial crop to be  planted next spring, or the chance for double cropping. Keep those Deer happy is my goal!

Thanks for stopping by Timber Life today....I like talking Deer.

Posted by CDGardens at 6:45 AM No comments: 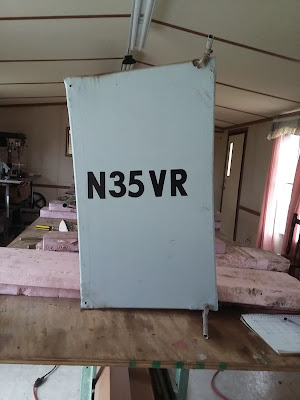 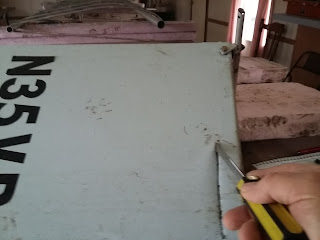 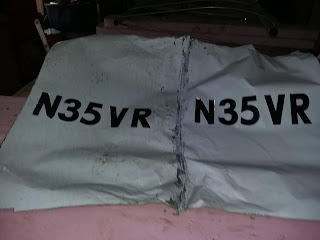 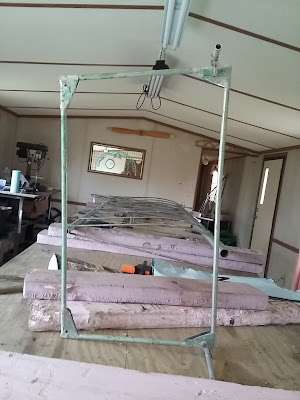 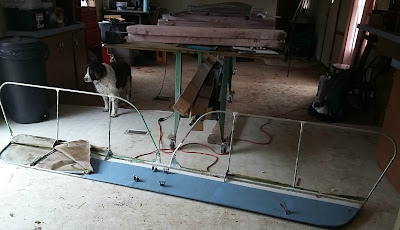 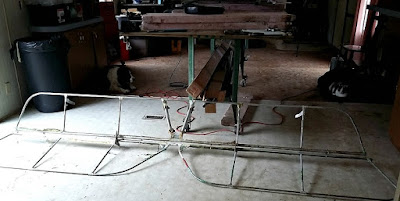 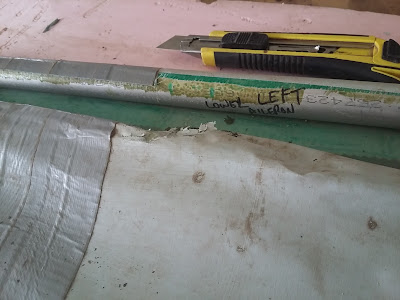 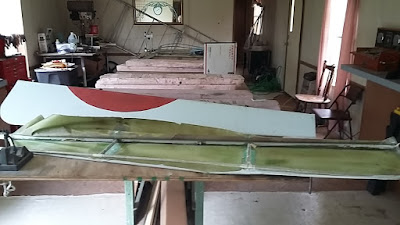 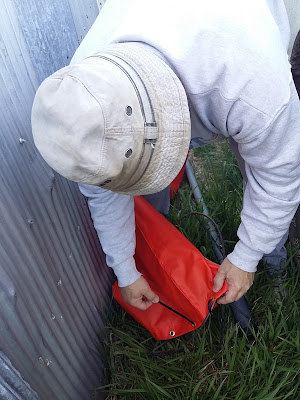 Saturday morning it was time to take the Windsock frame off the hangar to get Corey's new one strapped into place.

Having the Windsock keeps an eye to the sky attitude...Good for a Pilot's altitude. 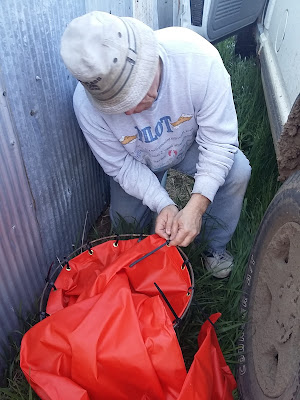 Almost all tied up!

As our luck would have it we needed to wait until the next day to get the windsock back on top of the Hangar due to a windspeed increase. The stability of trying to lift the frame pole against the drag of the wind would be impossible. 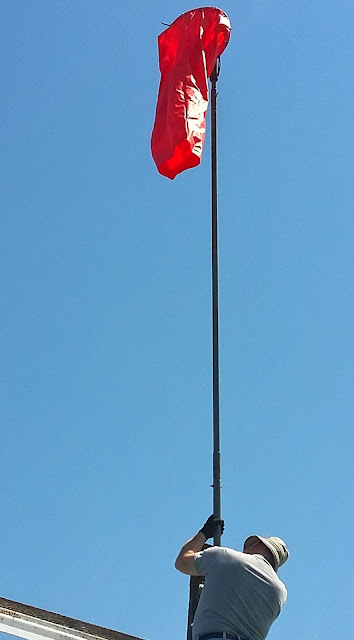 The Sunday afternoon winds were almost nothing coming over the warming ground of the bean fields.

We...I use the term loosely since I was the camera woman in command of documentation, got the Windsock up and filled with air.

Now, we can watch wind speed and direction, instead of an empty frame, that had become a perch to a few different species of birds.

Oh, and may I add? It adds color to the landscape in contrast to the soon to be rising  crops.

Beautiful!
Posted by CDGardens at 5:54 PM No comments: 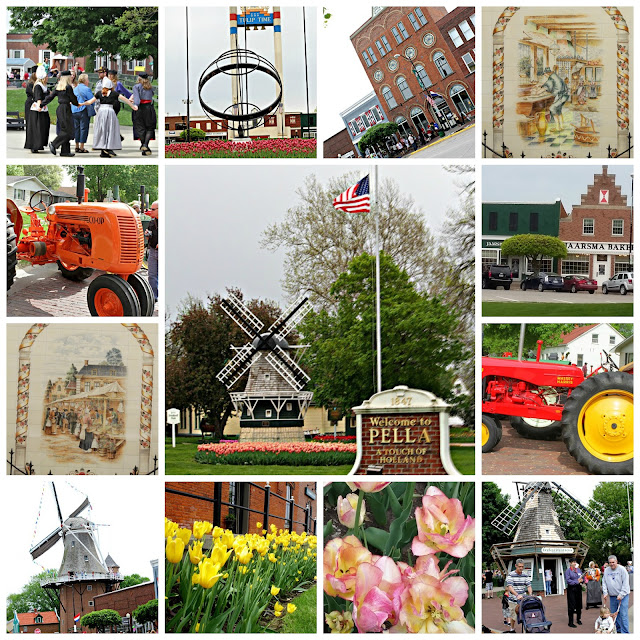 Looking back in retrospect at my pictures of Pella Tulip Time 2015 and 2017...I gave a glimpse of what you can experience if you choose to participate.

Our visit in 2015 was on the Saturday morning of the Festival. They had a display of antique work horses (OH! And Yes! Standing beside the orange tractor is a Favorite Individual,Subject , my husband Corey) and a Flea Market where we found some bottled home brewed Root Beer from Missouri. I bought an Heirloom Brandywine tomato plant from a young woman who showed me her interest in horticulture and some potholders from a vendor who made nothing else but varied fabric patterned potholders. There were artists providing their interpretations of different media of expression.

I could understand the process of the Flea Market vendor because I myself,CDGardens, spent the summer of 2001 growing and hauling what I had planted,cultivated,harvested,cleaned and packaged from my garden on my own. It was a learning experience that I didn't repeat because of the other things I was responsible to accomplish. I wouldn't change the experience.

Digressing back to Pella Tulip Time,I would highly recommend the ambience of the Dutch Village...

Posted by CDGardens at 5:37 AM No comments:

Taking a Look at Pembina Gorge 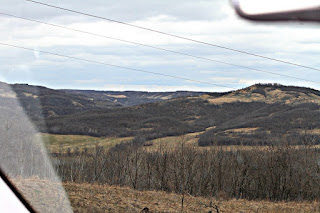 Easter Sunday afternoon rolled around. Lunch was done,leftovers put away and dishes were attended to.

Kyli became tour guide...Have to know the territory if you plan on visiting often, or when it's mentioned in conversation. So,Corey and I  were about to begin our indoctrination .

We headed for Evergreens and Birch trees as we climbed some hills to get to our destination. 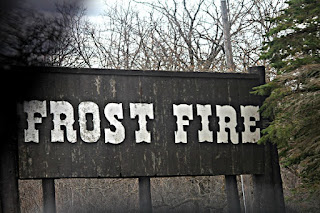 Along the road we came across what people familiar with the area know as the "Frost Fire Ski Resort", located at Wallhalla,ND.

The weather was chilly for the day but we lucked out overall, since the locals had been treated to 40+ inches of snow this winter and almost all had melted before our arrival. Actually, the snow wasn't finished for the season as we were getting a few flurries as we explored the area. 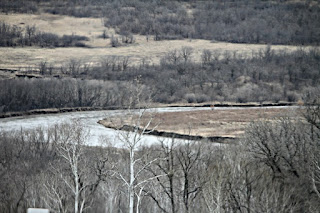 The Pembina River had receded back into it's banks after overflowing from the abundant snow melt.

Descending into the valley to get over the river before climbing the hill on the other-side. 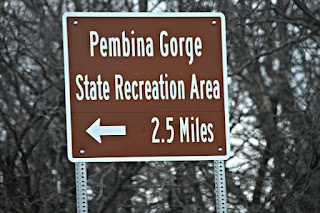 Up a few hills on the other-side, then around another few curves...we eventually came to the sign to show us just how much longer we would need to be searching for our destination. 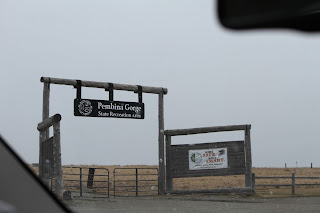 The gates were still closed to keep the ATV's off the  muddy terrain on the day of our visit. 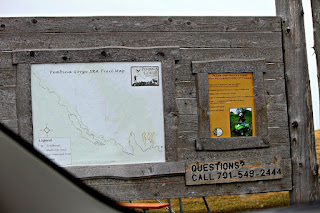 This cold and wet day was great for our fact finding mission.

Conveniently located just to the left of the gate you see above, was a map outlining the Gorge's 24 miles of  drive-able ATV and Dirt Bike trails. 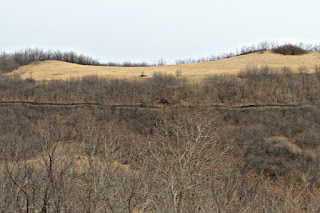 The empty ATV Trail getting dried out ,across the valley from where we parked to take in the view..

We saw evidence of how the soil layers have become filled with moisture and slid, or washed out of place.

Searching for information about the soil profile I went here. 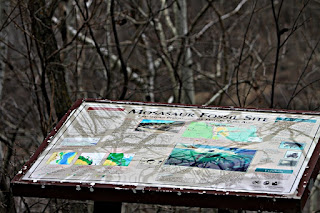 Fossils have been uncovered in the strata of the valley.

The discussion of the stated age of what man has perceived the earth to be and where the remains of the dinosaurs were found ensued among us as we continued on our way.

We continue to believe what God has stated in his Creation of Earth,Time and Space...I've found some Answers for the Biblical vs. Science theories we all are faced with when making our
own decisions. Take a look for yourself! 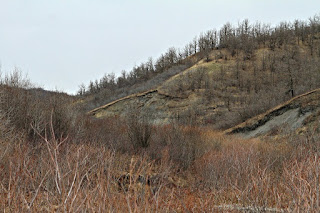 I know in time that all the rearranging slides will fill in with topsoil and vegetation but the time frame won't be immediate. It gives me an idea of the fragility of the geographical terrain.

Being able to have some recreational trails to enjoy while observing nature is a benefit for both Men and Women powered 2-wheelers...or maybe one of those  little canopy covered ATV's that blows mud into your face.

All I'm saying is Explore the Great Outdoors!

Until next time...Have a Great Day!

Posted by CDGardens at 6:16 PM No comments:

Last week my husband Corey and I got to enjoy some beautiful Tulip plantings when we stopped in to checkout some of the attractions. 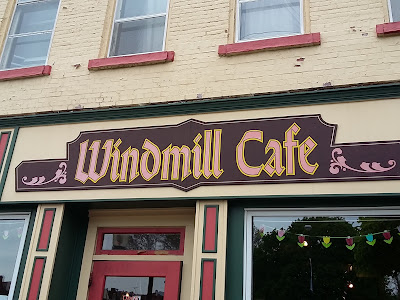 After breakfast at the Windmill Cafe...We grabbed the cameras,and cellphones, for a little bit of  photography practice over in the square; where most of this weekend's  festivities take place. 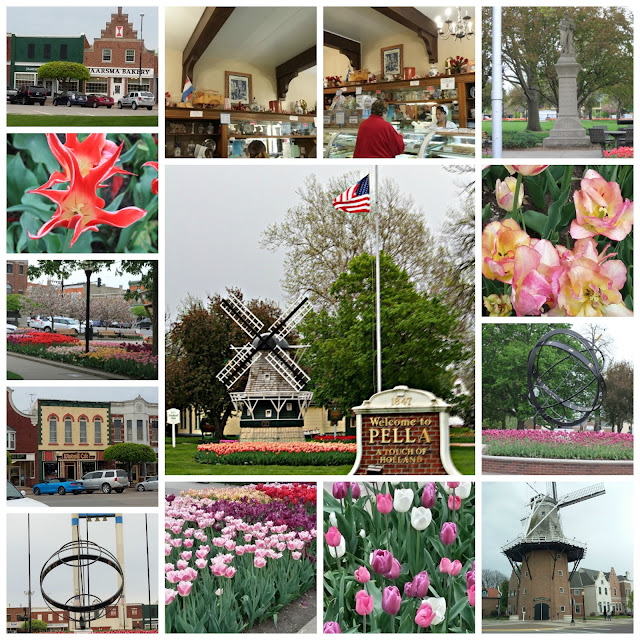 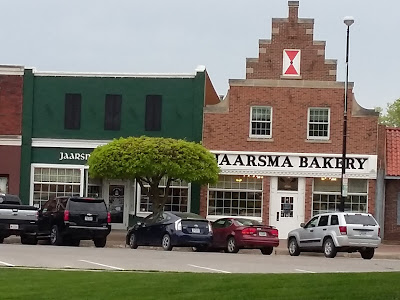 Our excursion in Pella ended with a stop at the Jaarsma Bakery to get some goodies to celebrate the day.

For your info ,those that like original Dutch pastries,you can order them online from Jaarsma Bakery to be delivered straight to your door. Checkout the link above.

Our visit ended here but our day was not done. It was time to head off to Red Rock Dam to find the Pelicans that linger around the Flood Gates. I'll post some pictures for you on another day.

Until next time Have a Great Day!
Posted by CDGardens at 3:25 PM No comments: