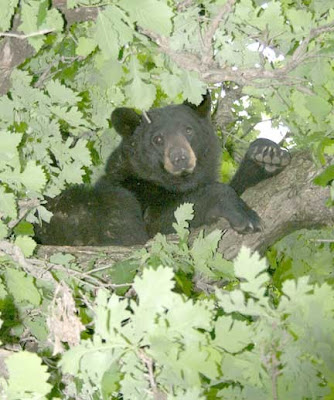 (Photo by Todd Waterman - Published at The Decorah Newspapers site)
This black bear was seen near Castalia on Monday, June 8th,2009. Reports by two individuals of their bear sightings was confirmed by Winneshiek County officials. The bear looked healthy as it made it's way out of Winneshiek and into northeastern Fayette County.The Sheriff’s Department is telling people to keep their distance, not to frighten the animal,preventing it from becoming defensive. It looks like there are more and more sightings of single bears in different sections of the state. One can only speculate from what direction they are arriving. Often it is believed they originate from the Minnesota/Wisconsin direction, and now it is being thought that increasing populations in the Ozarks are expanding northward. Whatever the cause,seeing a Black Bear in Iowa is not an everyday occurrence.

I know I am not ready to co-exist at Timber Life with those critters. Guess I can change if the need arises. Ahhh, the bear skin rug I need to put in front of our fireplace when we build our new home. ;) Iowa DNR report 2002. May 29,2008 North Liberty,IA. September 11,2008 KCCI News in Des Moines, IA reported a Black Bear sighting in Atlantic,IA a southwest Iowa community not far south of Interstate 80. They reported there had been bear sighted in six Iowa counties by that time, up since the last sightings in 2005.

Posted by CDGardens at 6:38 PM

Email ThisBlogThis!Share to TwitterShare to FacebookShare to Pinterest
Labels: Black Bears in Iowa

We have bears moving into our area from the northern part of the state. It definitely makes going into the woods a little more interesting.

Simply Outdoors - Between coyotes, the occasional mountain lion, maybe a wolf and now black bears we could become a pioneer state again...Where's the roaming buffalo?

Seriously though it is always good to be alert when going into the woods. You never know when there might be an animal not happy with you being there too. ;)

WEll, now y'all are just rubbing it in...my brother and I hunted hard for 7 days trying to bag a black bear to no avail...and here's proof that bears are just...well, everywhere!

Tom Sorenson- Ahhh, you still have a better chance of baggin' a bear in your own home state than we do.

Glad you are back making the blog circuit again. ;).

I haven't heard of any in Indiana. But not sure. Might have to ask my husband.

Anonymous - Hello...Glad you stopped by.

a dark jaguar is staying in the vernon springs area pictures are on a web cam belonging to a neighbor of steve and sandy reicks . sandy saw it yesterday pacing back and forth along her fenceline and is afraid to walk the praire spings nature trails anymore .. this is iowa we are talking about

Anonymous- I would love to see some pictures and hear the Reick's story about their encounter(s) with the dark jaguar.

We are seeing animal activity in Iowa that you wouldn't normally consider indigenous - at least not for more than a 100 years.

I haven't seen anything out of the ordinary & I am out quite a bit. I will keep eyes open to it though. Most I see are deer, coyotes,& bunnies.