Evidence of Spring in the Timber

This morning brought a little trek over a deer path, or two, to retrieve the trail camera card which hadn't been viewed since Friday. The weekend brought a few other things to do ;I thought maybe there would be a bunch of deer activity if I stayed away for awhile.
Our thunder chickens have been calling in the vicinity of the camera and that was another reason I made myself scarce since I didn't get a Spring license to be out sitting in wait for them to parade at the edge of the timber. Maybe they would by chance leave a digital impression for future viewing. It hasn't happened yet this season... 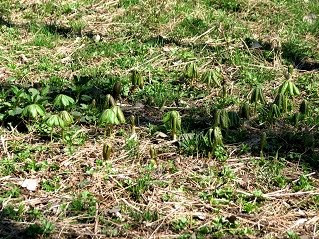 Along the trail I found some May Apples starting to send up their whorls. This weekend we had some summer like temperatures which seemed to spur the plant growth  already awakened by the seasonal highs.
I wonder how long it will be until they are in full flower and the morel mushrooms are popping?
Little violets can be seen sprouting above the surface of the ground...just big enough to know what type of plant it will become in the future. 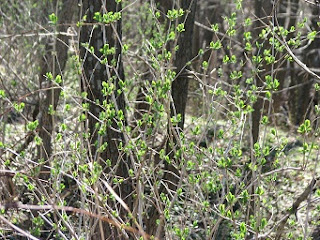 Honeysuckles are sending out leaves as are the rose brush,raspberry brambles and gooseberries.

One of the concerns I have again this year is that everything will be encouraged to bloom and then an extreme cold snap will happen at the same time. A chance for snow this coming weekend still has things not totally out of harms way. The forecast said it won't last long. Here's hoping that is true.

We have lost some acorn production the last couple of years due to ill timed freezes. Fall deer food supplies were short and the winter was  frigid ....Created some stress that some hadn't overcome from the last long winter. 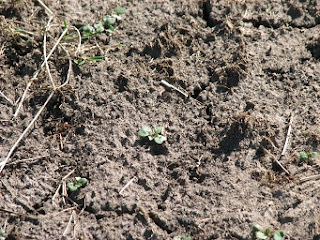 I did a small experiment beginning the last of February, when the snow initially started to disappear. Having some empty spots in our yard where the grass had been killed off by construction materials for our new home, I decided to seed some turnips. It is my understanding when some of the perennial broadleaf weeds start to grow you can plant cole crops and things that enjoy cooler temperatures to germinate. So, I gave it a try. This is my first seeding which became more prominent this past week. 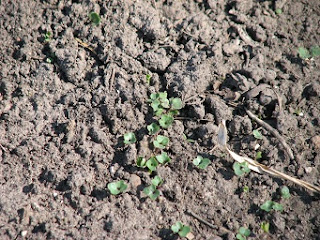 These little turnips were planted just before the rain came last week in one of my small deer plots. The winter greens had been totally chewed away so I wanted to get something going to get some food supplied to build up for the upcoming fawning season. The wind helped the seeds clump together while I was broadcasting so might end up doing some thinning.
My experiment leads me to believe that the turnips still need ground temperatures into the upper 40's for sprouting to occur,but pre-planting allows them to come up as the weather becomes optimal.
I am thankful for the moderate days we have been given and definitely looking forward to the sweet scents that will soon be wafting on the calm breezes emanating out of the timber at Timber Life.
Have a good day!
Posted by CDGardens at 5:19 PM 2 comments:

The beautiful April Spring weather turned tempestuous in Northwestern Iowa as a supercell thunderstorm came charging in from Nebraska on Saturday.

Blogspot Storm Chasers from Kansas and Iowa share their eye witness experiences of what they saw when this weather system started its destructive path.

I found the following videos from the weekend  at Tornadovideos.net  , a website devoted to showing us the extreme weather that has a growing number of people trying to capture digitally for others to view. More and more information is being gathered and the tools some of them use is quite sophisticated to track the developing storms.

My thoughts and prayers go out to all the communities that were touched by the numerous funnels. Reports say that as many as 27 twisters were spawned as the system passed over from mid-afternoon into the early morning hours.

We were not apart of the extreme weather here at Timber Life, but did see the lightening and hear the thunder in the distance to our north as the storm raced on to adjacent States...
Posted by CDGardens at 6:54 AM 2 comments: