A Mystery to Solve...

As of late my homestead has been having another elusive visitor in the late night, and early morning hours.

I have associated some of the activities with a raccoon constantly rummaging through the yard, but things have become a little more destructive. My potted plants are getting tipped over,the soil-less mix has been  totally dug-out from around the roots of a large pot of  Elephant Ear bulbs, newly planted strawberry leaves chewed, freshly set flowers in the garden uprooted.

My cat, Miss Kitty, has a snack shack on the deck, a recycled dog kennel, where she goes to eat her food to protect her from the elements. If I don't remove the food at night I can be assured to have a raccoon(s), possibly an opossum, and others come to feast. My thoughts run to Coyote...even Bobcat.

This past Monday in the wee hours of the morning, around 2:00, Sadie started barking at the front door. I got up to check to see what had gotten her attention. Looking out the window of the door, the deck was absent the snack shack, from the closed door I wasn't able to see where the kennel had gone.

I opened the door to get a better idea what was happening,Sadie didn't hesitate to dash out to check her territory. The snack shack had somehow made it's way to the bottom of the 4th step of the deck, turned askew on it's side. I can only assume whatever came to visit got stuck inside the kennel, because it would have taken force to move it across the deck, down the steps, and turned, from where it was originally sitting.

Following  a scent, Sadie started on the run in an attempt to locate the interloper. It wasn't more than 30 seconds when I heard a clang - the propane tank had become a momentary barrier to the escaping animal. I had a mental chuckle as my mind was imagining a dazed creature trying to make sense of the surroundings to find an escape route.

The animal that made the early morning wake up call remains a mystery, but I do know now for sure one mischievous creature that reincarnates it's behavior from one generation to another.

Thursday, another clue was provided on our temporary ramp to our new house construction. 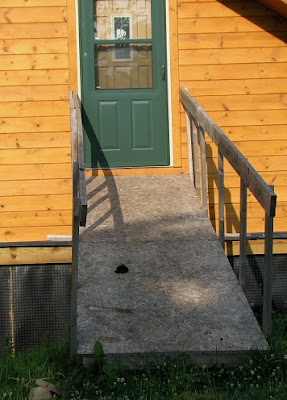 Scat that could belong to either a raccoon, or groundhog, was left as evidence of an early morning visit. Both animals share common characteristics at this time of year here at the Timber since they both harvest the berries. 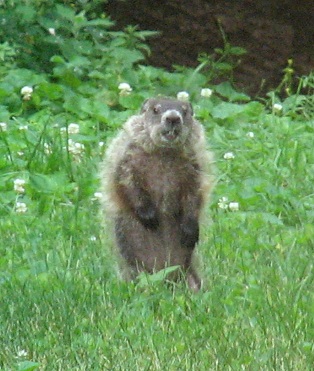 Working in the house on Friday morning before lunch, I passed the sliding glass door, and out of the corner of my eye I saw this creature standing on it's back legs not far from our Miss Kitty by the tree trunk.

I'm wondering if this groundhog  is related to the one that kept us entertained back in September of 2007 ? 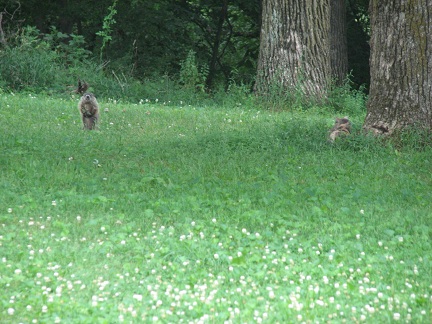 When it became aware of my attention...it would drop to all four feet and jump sideways. Then it became inquisitive again, checking to see if by chance I had been scared away by the aggressive maneuvers ,standing up it kept repeating it's actions until I moved on.

Last night we heard some bumps and bangs going on just outside our front door. We, Hubby, Sadie and I, headed to see what the ruckus was all about. A  family of masked bandits stopped  to take advantage of Miss Kitty's snack shack .

These three babies got separated from the others and waited  until a little less attention was being showered on them before making the great escape. 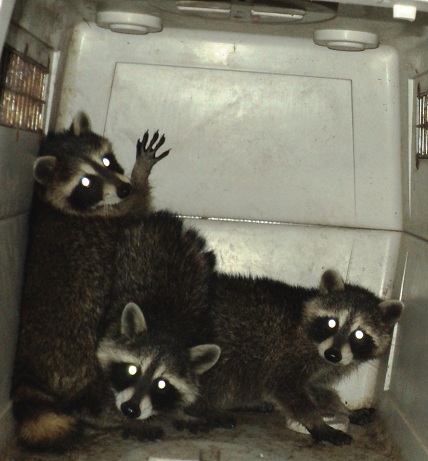 Another sample of what keeps us smiling in our daily lives here at Timber Life....
Posted by CDGardens at 10:08 PM No comments: