(Thanks to Justin Schnackenberg for catching this helicopter in action) While we were enjoying our visit to Jamestown,ND. last weekend we were keeping an eye to the sky,the sandbag walls,and earthen dikes. Flooding has been a very serious concern in Jamestown as well as the whole State of North Dakota. In good times the Jamestown Dam and Pipestem Reservoir are great fishing spots. However, this year with large amounts of snow and ice,now rain, the ground is saturated with nowhere for the extra water to go except overland. The clean-up at Pipestem is already being planned to get it opened for all the anglers wanting to get back to the important business of fishing. "First time" records are being set for the Jamestown Dam.

Posted by CDGardens at 6:43 AM No comments: 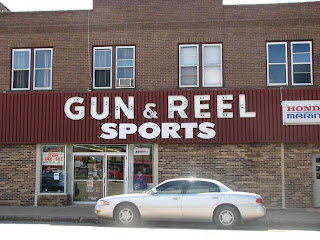 115 1st Street West
Jamestown, ND 58401
701-252-2850
800-427-2850
www.gunandreelsports.com
My visits to Jamestown, ND. have taken me past this outdoor sports supplier many times. I kept telling myself the next time I came to town that I would go see what they had in their inventory. This past weekend became that opportunity. I would like to thank Gary Docktor, son of one of the original owners, for his time in sharing how Gun & Reel has come to be an outdoor sports supplier for the residents of central North Dakota and those like me who stop by when they are passing through. When I asked Mr. Docktor how things began, this is what I learned - Gerome Docktor and Bob Brastrup returned to Jamestown from their tour of service in different branches of the military. They each had different careers until a common interest in hunting and fishing brought them together. In 1953 they decided to become partners in a business to help meet the needs of those of like interest. In 1987, Bob passed away and Gerome incorporated to sell shares to his employees. Presently there are three partners, two of them are interested in retiring soon and Gary would like to keep the business in the family. He will be buying out those shares with hopes that eventually his son may decide to join him in running the store after his graduation from college with a business degree. The same route that Gary took after he graduated from high school. The original business began two doors to the east of their present location. As time went on the business evolved and moved to the vacant Montgomery Ward building, with more space came an expanded inventory to cover a wider range of needs. Present inventory covers hunting,fishing,athletic apparel,ATVs,motorcycles, lawnmowers and generators to name a few catergories. Gary said he enjoys mainly bird hunting( ducks,geese,and pheasant). There are enough of his friends that take larger game that he receives their extra to supply his table. Gary's son was mentored by his grandfather in the full range of outdoor experiences and shares the love of hunting the bigger game. I really enjoyed the family owned - hometown atmosphere that Gun & Reel Sports gives to those who enter their doors. It will be a place for me to stop again when I visit Jamestown.

Stop by and take a tour through pictures, or maybe even onsite the next time you are passing through central North Dakota off Interstate 94.
Posted by CDGardens at 12:54 PM 4 comments:

Time for a trip to North Dakota...We added a side event to our route to visit our daughter and her husband in Jamestown. Hubby wanted to visit a man in rural Barney who was building a couple of planes by a design/builder from Missouri named Bob Bosley. Hubby and Tex belong to a discussion forum that hooks people up to share current aircraft building projects. Those who belong gain knowledge from others who have built and may, or may not, make choices of what planes could be a part of the next project in the hangar. We ended up finding a very deep soft spot in Tex's drive as the frost is just coming out of the ground from the winter . The driver's side front wheel was lodged soundly in a hole...Tex was able to get us out with his bobcat. It could have happened here at home just as easily. Tex said in jest"Welcome to North Dakota." All of us broke out in a laugh. Sadie and I spent our time in the car which became a sauna due to the warmer temperatures that accompanied us northward. Although we weren't alone, we too ended up having a visitor. There was a BIG dog running around the farm, not knowing her temperment for sure we,Sadie and I stayed put. Eventually it was discovered that the BIG dog whose name was Piper(yes after a plane "Piper Cub")was a BIG teddybear. Definitely a sweet GreatDane-Mastiff mix. 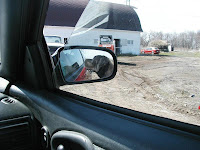 After Hubby spent some time with Tex getting aquainted and snapping some pictures we were back on the road again. There was a building I saw when we turned to go to Tex's place that caught my attention. Before we left the area I took a picture to keep it in the same condition forever in my memory. 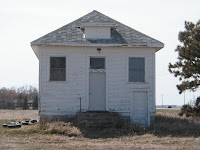 Today we don't see many one roomed schoolhouses still in this shape. In our west-northwest trek towards Jamestown we saw other one roomed buildings but not in the same condition as this one. You never know when there won't be anymore to mark the passing of our past generations and the community gatherings that happened there...
Posted by CDGardens at 10:39 AM 4 comments: 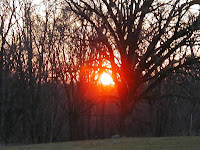 Good Morning World!
The crisp air at sunrise gave the perfect setting for all the birds to erupt in song. What a perfect greeting for the day to begin! 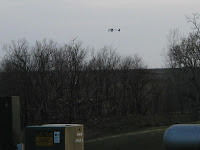 Later in the day hubby took advantage of some smooth air to get off the ground for a short hop around the patch before the sunset. Clouds had moved in to set the stage for future moisture. It has been a wonderful day with forays into the timber to see what flora is erupting with the warmer temperatures. 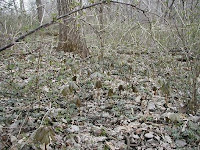 Time lapse photography would have been fun today. The Mayapples are erupting swiftly from the ground. It won't be long until they are blooming,an indicator for us to be looking for the coveted Morel Mushroom. Gooseberry,Wild Raspberry, Honeysuckle and Multi-flora rosebrush are among the plants putting on new leaves preparing for fruiting blooms. The Wild Honeybees have been awake and buzzing for almost three weeks. They would invite themselves into the house when I opened the back door during some of the cold snaps. It didn't take them long to find there wasn't anything they needed andwould head back out the other direction. It wasn't very long ago there were cooler temps. I was wondering if it would ever end. True Spring has arrived at Timber Life and the hope to see new life begins anew. Hope things are improving in your neck of the woods too! ;)
Posted by CDGardens at 10:41 AM 8 comments: