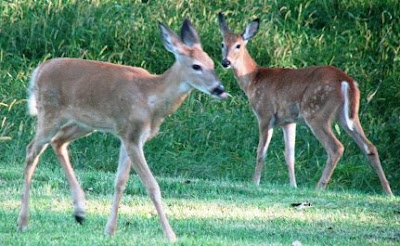 Last Summer I planted some sample Deer Plot seeds from the Whitetail Institute of North America.

I prepared my little 10'x10' plots by tilling, adding fertilizer and some quick acting lime since I had already waited one season to get the work done. Talk about anxious to see what they would bring...

The rain had been sparse so the weed populations I wanted to eliminate didn't sprout before planting.They waited until this year 2010, after all the snow and almost non-stop rain to make their appearance. I will have some work to do getting things back in shape, but even with everything not being pristine I have seen the aftermath of grazing. Daytime activity has been limited to mature Does and their fawns; the cover of nighttime allows for a buck or two to visit. The only evidence I've seen of the buck activity is the hoof /dew claw imprints left in the mud.

The pictures posted here were taken September 24th,2009, unless otherwise noted - plants were two months old. A healthy growth after getting some moisture.


During the planting stage I placed a 5' tomato cage with 6" openings in the center of my plots monitoring growth compared to feeding activity. In the late Fall the cage in the Chic Magnet plot ended up pulled out and smashed. I can only imagine that it caught a buck's antlers who was after the tender growth in the middle. It didn't really dawn on me until I was taking a walk into the timber via the food plots last winter and saw it laying on the ground covered by snow.

The No Plow wasn't planted until September 24th, 2009, it didn't have a chance to sprout. I didn't pursue another planting, instead I am grooming the space for a mineral lick using The Original Deer Cane Liquid Ready-To-Use. It has been down for at least a month and no evidence of use has been seen. It has received a lot of rain. Timing may certainly be a consideration in the need for supplementation according to information I located at the Quality Deer Management Association. I am going to wait until next Spring to add anymore supplements, but with the traffic patterns changing due to the  the seasons, they might find it and come back in the future.


I must apologize to Ben G., one year since his comment postings. I was having some pretty long days at the time , my cognitive reasoning was impaired and I removed them from my post. In an attempt to make things right I have kept his second comment to re-post with my update.

This sounds like quite the experiment. I would be curious to see how a plain old alfalfa plot would compare to one of your packets. Any way I look forward to the results.
I'm trying to convince a buddy of mine to do a food plot on his land.
Maybe your results will sway him to plant a plot or two.

So, Ben, were you able to get your buddy to put a food plot on his land?

In summary I would like to increase the areas for food plots. At this point I can see the advantages of having all these that I have planted. However, when I groom my first larger area I believe I will be going with Alpha Rack Plus not far from the mineral lick location...

This is a consumer review of the Whitetail Institute and Deer Cane Products. I will not be receiving any monetary reward for expressing my opinions.
Posted by CDGardens at 10:05 AM 7 comments: