Warning :To my readers who are squeamish about skeletal remains,this post isn't for you. 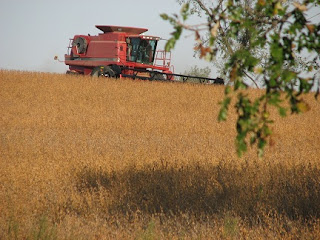 This past week I was meandering across the soybean field that was harvested almost a month ago. I like to watch the crops grow in the Spring,and Summer, but appreciate when the fields open up again for exploration, and hunting in the Fall and Winter.

I am a student of my immediate environment, in hopes of observing patterns from year to year.

On this day, our dog Sadie was off getting her sniff quotient satisfied,as I was taking my time moving from one place to another. My eyes to the ground, I kept scanning the crop debris for interesting rocks that have worked their way to the soil surface, or something out of the ordinary.

I came across an exposed rock, one among thousands in the field. However, this one caught my attention with what first looked like broken egg shells laying beside it. I tried to rationalize that some animal may have carried them away from a turkey nest earlier in the season and they were just now being exposed. 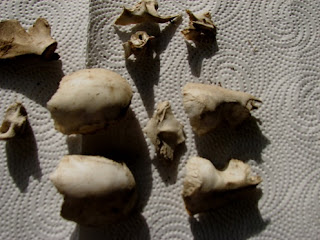 Using the tip of my shoe I tried to turn the egg shell over. It soon became apparent that what I was seeing was most certainly not egg shells, but the top part of a skull. I bent over to get a closer look. Scooping away bean chaff I saw something else that reminded me of a canine molar. Again, after closer examination, I found that it was a bone that would make up part of a spine. Eventually, the total picture of what I had found began to take shape.

The whole find could be contained within my closed hands. Holding the skull bones ever so gently so they wouldn't collapse. 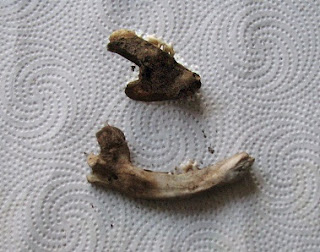 Now, what did I find? The jawbone reminds me of a miniature deer. There are remnants of hair on a couple of pieces of the bone, not enough to be used for identification though.

Inside the jawbone are teeth that had not yet erupted to become useful. I did not find any evidence of sharp,ripping type teeth, that would indicate an omnivore.

The condition of the bones lead me to believe that these remains are from the Spring,because they don't show extreme yellowing,or drying.

It is apparent I am missing  pieces to my puzzle that might more clearly give me the answers I seek. For now it is intriguing to consider the possibilities... ;)