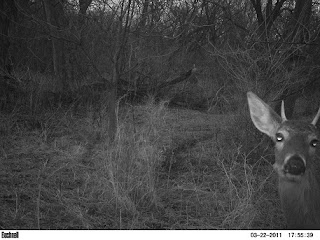 My trail camera has been out watching for events such as you see in the picture to your left . This individual has yet to shed his little spikes from last season. The picture came off the camera on March 22nd. His first digital capture.

I have wanted to keep an eye on antler growth of our Whitetail Buck population passing through daily.

Some of the bucks still show recent effects of rubbing their antlers off; others are on their way to new velvet development. 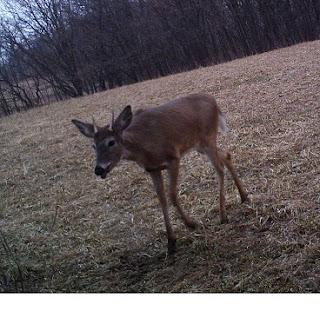 This picture came off the camera this morning. The young buck still seems to have no indications he might be losing his little spikes anytime soon.

We will just have to keep an eye out and see if we can catch him later sporting a new look. 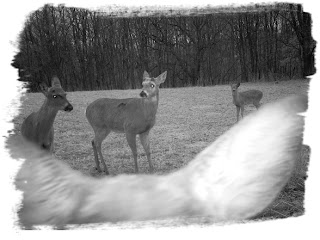 This is one of my favorite trail camera pictures I have gotten this Spring.

Adding a bit of art has made it appear like a print I would like to put in a frame at a future time.

Hubby and I were given a Kodak EasyShare P730 digital frame for Christmas. We got it out of the box recently and plugged in a memory card. Easier and more economical than printing ALL my pictures off.

Oh my! Did the creative ideas begin to form then. I can keep the deer walking around the house all day.They'll never get off the trail again...

Have a great day!

Disclaimer: I am not in anyway affiliated with the Kodak company and will not receive any monetary funds for mentioning their product in my post.

We are again being asked to garner public comments on a recent study of  The Bureau of Alcohol, Tobacco, Firearms, and Explosives (ATF).

The Firearms Coalition is making gun owners aware of the actions now being considered and the timely manner in which our responses need to be submitted. Please checkout the link for more specific information.

Below is a sample comment you can paraphrase or simply cut and paste into your own email:
Subject: I Oppose Further Restrictions on Shotgun Imports
I strongly oppose further restrictions on the importation of shotguns and disagree with the findings in the ATF shotgun study.
The constitutional authority for import restrictions based on a vague “Sporting Purpose Test” is highly suspect in light of the recent Heller and McDonald Supreme Court decisions and the Court’s previous decision in Miller.
Under the definitions contained in this study, virtually all pump-action and semi-auto shotguns would be banned because all of them are capable of accepting a magazine – box or tube – capable of holding more than 5 rounds.  This and other characteristics determined to be “military” in the study are utilitarian and often significantly enhance a gun’s usefulness, particularly for people with disabilities.  Denying access to certain designs or features can effectively serve to disarm (for personal defense and sporting purposes) vast numbers of disabled veterans and others with disabilities resulting in violation of the Americans with Disabilities Act.
There are a variety of popular and growing sports which utilize shotguns with “military” features.  These guns are dominant in USPSA, IDPA, IPSC and other popular shooting sports.  Refusing to recognize these sports as they relate to shotguns based on the implications such recognition might have on rifle and pistol importability is disingenuous at best.
Applying import restrictions does little more than increase costs and complicate compliance for US shooters and gun owners.  Foreign manufacturers remove features and adapt their firearms to comply with US import restrictions and then US shooters modify the firearms back to the desired, original configurations.  This can be expensive and legally dangerous since failing to comply with obscure provisions of the laws related to altering imported firearms can result in unintended commission of multiple felonies which carry serious penalties.
ATF should shelve all plans to implement any of the findings of this study.
Respectfully submitted,
I strongly recommend adding some personal opinions of these actions and your feelings of potential,broader restrictions that could  be implemented. If they get the ban for shotgun imports put into law...Will they then work on domestic brands?
After the series of shootings that has happened, we see the push to take away the rights of individuals to carry firearms of any sort. I am going to echo the frame of thought that it isn't the gun acting on it's own that causes the problem,but the person handling it...
Posted by CDGardens at 10:10 AM No comments: