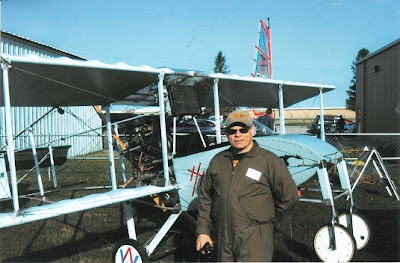 I would like to take this opportunity to wish my Hubby a  Happy Father's Day.

At this writing he is sitting at an airfield in
Chillicothe,MO waiting for favorable conditions to return to our grass strip here in Central Iowa.

Early Thursday morning we pulled the Voisin 3/5ths out for a long hop down to Gardner,KS, home base of the Kansas City Dawn Patrol. They have a yearly Fly-In on the Friday afternoon and Saturday before Father's Day.

Hubby trailered his plane to the event when it was in the building stages way back when. He has watched the weather every year to see if the flight windows would be open long enough for him to get from one airfield to another before making him sit the thunderstorms out.

When we pulled the Voisin 3/5ths out of the hangar for the this "first "  but much planned for Gardner excursion via the airways, we were aware of  forecast of thunderstorms in the target area. The clouds and rain made their returns known on the radar out in Nebraska stretching southward at the hour of our search.

The air was perfect for departure here at Timber Life, so that he did...

The first leg of his journey took him to Corydon, IA where he met up with his ground crew and another pilot from his local Experimental Aircraft Association Chapter. Things were good until reaching the second stop at Chillicothe on his way down. They sat until 5:00 PM, letting the thunderstorms pass before starting once again on their westward objective. I have been told that they made some in flight decisions as to where they would stop for the night. Hubby's plane is a daylight plane. He doesn't have any landing lights and he found himself landing at 9:00PM, in the dark because of cloud cover at an airport at Lawrence, KS.

Friday morning had them waiting for the short hop back north, again due to strong rain. Afternoon brought them good flight weather and the pilots were able to join the other WWI,WWII and current planes that came to share in the event.

During the very early morning hours Saturday, a popup camper shaking thunderstorm with 70mph winds came through. Prior to sunrise Hubby went out to see if his plane survived the hour long deluge. His heart sank when he didn't find his aircraft tied down where he put it to bed the night before. The Voisin was the only plane to take flight without its pilot in tow. Damage to important parts left the plane not air worthy until  fixed. It was good to have a place to get things patched up even though it took him away from sharing in the festivities of the day.

We expect to have him touch down on home turf come this afternoon. Then we can celebrate his safe return and  another year of being a Dad.

Before I end my post today I would like to wish all the Dad's a relaxing Happy Father's Day with their family and friends...
Posted by CDGardens at 10:15 AM No comments: