3:52 A.M. RUSHING Winds of 60 MPH +,pelting rains,thunder and lightening awoke me from a twilight slumber.

The electricity gave indications that it wouldn't be a reliable power source for much longer after I climbed out of bed.

I did have a chance to catch some weather news before modern technology grew silent. The news only reinforced what I saw in the light of the lightening and the noise of the thunder I heard echoing all around.

7:05 A.M., well after sunrise - technology remains silent. Mother-Nature has calmed down, but once in a while a few more drops of rain can be seen dropping into the puddles filled by the earlier deluge.

Quiet has returned,except for the birds which found their voices...Certainly, a more pleasant way to welcome the day than the rude awakening of a few hours ago.

Another hour and a half passed until electrical service returned to stir into action the machines that make daily living here at Timber Life move smoothly.

Trees on houses, new construction in progress collapsed, just tasseled corn unevenly fallen at the whim of the down bursts skipping over the area . 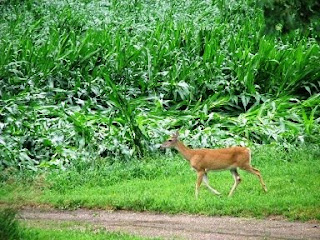 Assessing the damage has swung into gear.

The deer keep vigil  over the field corn . Tassels were beginning to come out, silk and ears would have been developing soon.It looks like the harvest for man and deer will be limited this season.

Our forecast for the early morning hours tomorrow brings a repeat of what was experienced this morning. It is going to be very interesting to see if it reaches the same intensity as it did today .

Wind speeds were estimated to be 105 MPH at the little town 6 miles to the west of us. People throughout central Iowa felt the devastating power of the air masses mixing it up. What a fight they had! I don't want to forget to mention anyone who has been affected by the weather, but I am better informed about our little section of the State. Please stay safe during these drastically hot days.

The ongoing strong weather for the summer of 2011...Where will it hit next?
Posted by CDGardens at 7:13 PM 2 comments: