The weather has remained extremely mild for January here in Iowa. Open waters or partially open waters have kept geese situated in urban locations around our capitol city of Des Moines.

I found geese sitting on a  sand pit in Johnston, a suburb of Des Moines along I-80/I-35 on January 5th, but didn't stop to get a picture. My path was leading me over to Fisher Lake where the Bald Eagles had a reported presence since December 21st.


The following picture is being pulled out of my archives...Hubby and I were headed north on I-35 following a family Thanksgiving.

We were driving our pickup that had slightly tinted windows and the light of the late afternoon left the digital exposure dark.My intent on getting the picture was to catch the moment as the geese were flying s from west to east over the interstate headed in the direction of the airport. Going in for a landing perhaps?!? 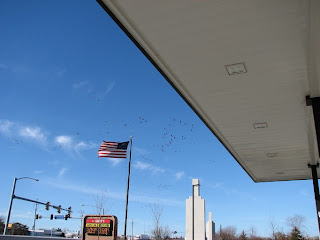 Getting more pictures in Ankeny, a growing city north of Des Moines, on I-35 back on December 29th, 2011 kept me in awe. The birds like to congregate in the vicinity of the airport due to some water features created by corporations and a hotel.

Parked at the gas island of a Casey's convenience store I started snapping pictures ...

The car filled with gas I was on my way. 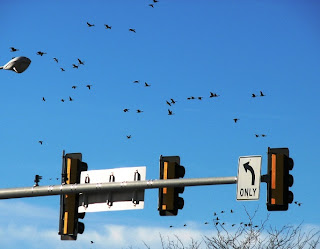 The geese are definitely focused on the way they want to head. Waves and waves of them passed by with the same thing in mind.

No stopping to chat, for the target lake was almost under foot as they reached this point. 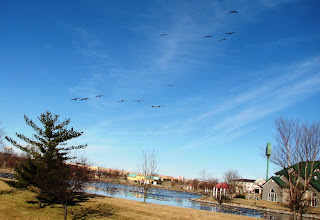 Then I moved over to the lake by the  Comfort Inn hotel where they were coming to rest.

I didn't want to look straight up as the geese passed over in the event something would come following the  gravitational pull of our atmosphere.

Luck was with me...no bombs came to rest in my vector. 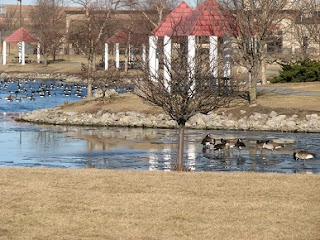 Ice shelves gave some of the geese enough support to stand on one leg for a nap.

My visit was short so I don't know how long these guys and gals actually were able to tuck there beaks under a wing.

As I stood taking pictures another car pulled up behind me. A young woman headed closer to the group.

I stayed back to keep stress for the geese to a minimum. 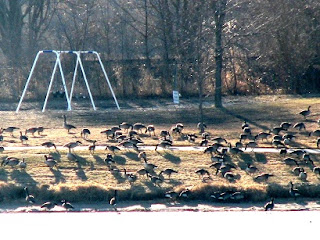 Yesterday, on a trip into town I stopped at Bondurant, a little town I pass on this route to my destination. They have a little sports complex/park situated by  highway 330.

This  group was but a small sample of all the geese that were scratching the ground or sitting at waters edge preparing for whatever direction the winds were about to take them.


Each year it seems as though we host these winged water fowl longer and longer. Some have decided our marshes and farm ponds are great places to raise a family...oh to see how many will return to set up their own households.

Our weather has taken a turn towards winter over the last 24 hours , snow was a dusting, and flurries persist  here at Timber Life. The blustery winds are finally sending its chill and I imagine the waters will begin closing up for a few months- our winged visitors will have to finally get on their way further south...
Posted by CDGardens at 1:32 PM No comments: