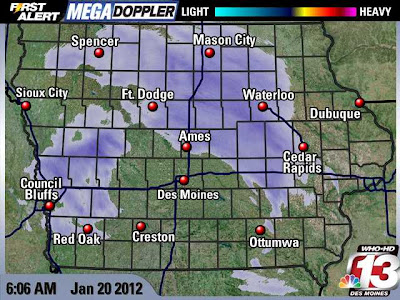 The  bubble broke this week keeping us without the seasonal snow cover . Up until now the little amounts dropped in fast moving fronts have disappeared within hours or a day at most. Tuesday, brought 2-3 inches and on radar the storm today is expanding. As of the forecast this morning they are telling us 3", but a chance for more might be possible.,time will tell...Don't want wind above 5 mph the dreaded drifts would start whipping up and closing the driveway.

Ah! Recent weather update says the snow should end in Des Moines by the end of the morning . Wouldn't you know it the roads are reportedly slick in my neck of the woods. Hubby's commute home could be interesting  later today.

Wait a few minutes - it appears we are again going to luck out without a huge deluge of those big snowflakes continuing to drift earthwards.

I am already looking forward to the February thaw, or at least temps in the 20's without wind. "Could we be in for winter into late March???", I say with a sigh...
Posted by CDGardens at 9:33 AM 2 comments: