Shed Hunting Comes to an End

Yesterday was the last day of shed hunting here at Timber Life.

We found our last antler on Monday, along with the top side of  a canine skull. I may have seen it last year in my rounds, but left it. This year I brought it back to the house to do some research to define which predator species coyote, or fox had found it's rest among the trees.


Back to the final tally for the active shed hunt season: Sadie- 2 - CDGardens - 3, plus 3 in cooperation for a total of eight. I would see something, head in that direction to check it out, and Sadie would run ahead to confirm it with the sniff test. 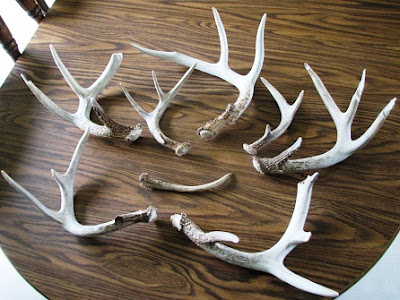 I have four antlers in good shape and four antlers in various states of gnaw or rub damage. I stated it was the ratio of three good and five damaged on another website, but looking things over again, I need to readjust the number by one.

Now that I have recorded the take Sadie will get to add the damaged ones to her stash of chew sticks for as long as they last.

Plans for antler art = chandelier are coming together with each yearly addition...
Posted by CDGardens at 10:04 AM 2 comments: