Hunting the past two days of  deer season one left our tags still available to be filled.

Word of mouth information about day one had made a heavy decrease in the area deer population with groups hunting adjacent properties .

This morning I rambled out to the blind before the sunrise to get the day started. The difference this time  was the absence of a deer snort immediately alerting me to their presence , a change from the last two mornings.

The direction  of the morning deer movement shifted from a north/south direction at the start, to a south/north today.Which was curious because the wind was still coming out of the south. As I sat in the blind I saw deer of size just as the light of day was coming up, but of course they didn't stick around long enough for me to make sure the shot I would send in their direction made contact.

By 7:30AM,  with one last doe stopping to check the air long enough for me to finally send off a" first shot",  I sent her running without success...I closed up the blind windows, stepped out of the doorway, and headed back to the house. Getting back to the house I started my daily housekeeping activities, because I was scheduled to be away running errands for my Mom, and chauffeuring her to a Dr.'s appointment in the afternoon.

Well, things took a different path about an hour later.

A call from my neighbor alerting me to a drive to flush out a big buck by other hunters west of us had me headed off to the ravine, just in case he ran this far...

I didn't immediately go clear out to the end of the ravine which is surrounded by open cropland, but stopped by a fence line, and hid behind a clump of trees. My initial decision allowed me to see a doe with a couple of fawns run across where I would later take a stand behind a fallen Cottonwood tree. Before I moved out I was visited by the sound of snapping and cracking ground debris under the foot of some creature in a hurry to get beyond it's current situation. Turning to look instead of holding my gaze forward , I saw a one antlered buck startled by someone standing on the path in front of him. He twirled around at which time I let go a shot. We were in a location where the brush and fallen limbs created a challenge for both man and creature to get around in a panic. His footing had him slipping and trying to gain his composure to high tail it out of there...I shot once more as he traveled back the way he came.

My first reaction was to follow him. Hearing the shots my neighbor who had come to try to move the big buck my direction in the event it arrived, came to see if he could help. I told him of my situation , it was then that  I moved out to the end of the ravine to wait for things to happen, since this was not the animal he had been told about.

After waiting and hearing shotguns go off to the west  it was decided the big buck probably wouldn't be headed this far east - time to go back and see if I could find that one antlered buck before I needed to get ready to leave for the afternoon.

Examining the trail the buck took there wasn't any blood to verify it had suffered any type of injury. However, I was still driven to see if it was okay, or if I could tag it. I kept going, surveying the terrain up and down . Sometimes you just have the feeling you need to keep looking.  Not changing trails, I came upon him laying down crosswise. He was slow to get up, but that he did. He was injured ...I followed him until he ran across the ravine with no signs of stopping. With other commitments looming in the time frame I had to make some choices.

I knew I wouldn't be able to get back before dark to continue my hunt, and I didn't want to leave him to the timber overnight. So, I contacted the neighbor who had been on the buck watch with me to see if he might be able to take a look around. He had some troubles locating him at first - there wasn't a blood trail. I am grateful to him and his son for bringing the one antlered buck back to the homestead for me to claim. 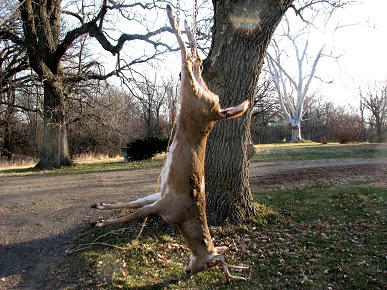 Hubby helped to get him suspended up off the ground until I could get him skinned. Had to keep him high or I would have been inviting the coyotes to a feast

I can't say how much he weighed. I don't have a way of checking that statistic.

I can tell you this about him - he is an old buck. After checking to see  what the condition of his teeth were, it became evident that all his molars are missing. The only teeth left were in the front and they still looked to be in good shape. 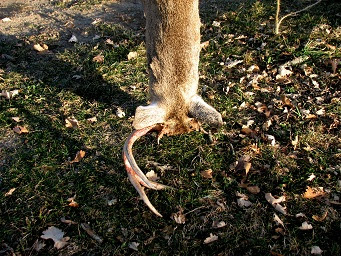 The base of his antler and broken stub have good diameter.

When I first came in contact with him
on the trail it was hard to miss he no longer sported a matched pair of tines.
Then of course the question came to mind,"How did he lose it?"

Was it absent due to a battle with the younger, bigger bucks inhabiting the area, or had he been running in one of the groups over the weekend, getting too close to another hunter?


Whatever the case, I am happy to have as my "bring home" buck, a wizened warrior of the timber....