The weather has been really nice for December. Deer hunting hasn't been as much of a challenge as in past years where snow and wind  created slippery footing, and -20 below windchills.

Other hunters say it makes the deer blend into the surroundings when we don't have snow on the ground, but I haven't had any troubles seeing where they think themselves invisible .

Day 4, of our first shotgun season found me making a road trip to southwest Iowa. My "BIG RIG" driving brother needed a little four wheeler to chauffeur him to a few business transactions where his 18 Wheeler wouldn't have been welcome. 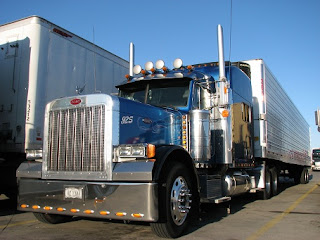 He has babied his truck to keep him moving across the ribbons of highways,a purchase made on his return to trucking after almost calling it quits when he was placed on a heart transplant list 8 years ago.

With medication he improved enough to be taken off the list and was able to get back to doing the only thing he had done since graduating high school, driving a big rig.

My brother says that the engine has over a million miles on it, but notes it has been rebuilt once within that time. 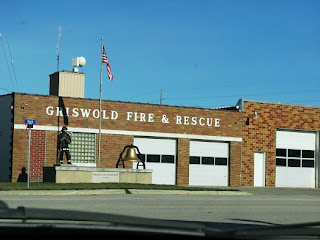 It had been a couple years since I had been back to our hometown of Griswold.

The last time was when I took my Mom back to get things in order for the next step in her life, preparing her wishes for the time when she steps beyond the bonds of her earthly body. A wise choice to make...No second guessing by family members left behind.

While we were in town we stopped at the telephone office to get some information, visiting with two women - one who had been apart of our smaller community of Noble Center Twnshp. The other was a year ahead of us in school. However, I was apart of the same social circles, we both played flute in band, and sang in the same section in choir. It was nice to have made a brief reconnection on our stop and go day. To hear how the years had added to their families...

I have started collecting pictures of murals painted on the sides of small town businesses.

Each one tells the story of the area residents that make- up the town and their surroundings.

The front of the semi-truck reminds me of one company in particular that I am aware of in town. I may be mistaken, but I believe it to be another one of my classmates who took over a family business when his father passed away .

The produce and fruits are representing what I knew as Glen Robins Orchard, now it is called
3 Bee Farms , owned by Mike and Donna Brahms who bought it three years ago.

Of course the tractor and cropland signifies a time honored occupation, farming. An important activity to many one way or another.

Our road trip took up the legal hunting hours, there wasn't a chance to be out waiting for the deer to pass, or out on a trail pursuing them to bring home.

Day 5, Wednesday, December 5th, I spent the day rendering the buck to get the meat in the refrigerator. Then the tedious job of cutting, chopping, grinding and blending began. Well worth the effort to have meat in the freezer. So, ended the first Iowa Shotgun Season for me this year.

I will be returning soon to share how the Second Shotgun fared for us here at Timber Life.Looking forward to your visit...
Posted by CDGardens at 6:47 PM No comments: