One of the songs that became important to me as a Junior in High School was "There's Just Something About That Name" by Bill and Gloria Gaither. I had heard it on the radio prior to being asked to accompany a visiting vocalist at our small country church where I was a member at the time. I wasn't a great piano player in public, no confidence when it comes to being in front of everyone. I haven't played the piano for years now. However, one Sunday evening before Church when only a few people had begun to arrive I did find a simple version of this song in the piano bench and touched every note written. Made my heart smile.

Ah,the memories of trying to perform after only one time through with the vocalist herself. True to form I muddled to completion...I felt I did an injustice to the vocalist but to this day the words still come flowing out of my memory. A comforting memory. Music always seems to bring my thoughts back to focus.

As we enter this week - a holy week, in remembrance of the events leading up to the crucifixion of the Lord Jesus Christ I want to share this song . A song that I still hold dear to my heart...


There's Something About That Name

(Spoken Words)
Jesus, the mere mention of His name can calm the storm, heal the broken, raise the dead. At the name of Jesus, I've seen sin-hardened men melted, derelicts transformed, the lights of hope put back into the eyes of a hopeless child. At the name of Jesus, hatred and bitterness turn to love and forgiveness; arguments cease.

I've heard a mother softly breathe His name at the bedside of a child delirious from fever, and I've watched that little body grow quiet and the fevered brow cool.

I've sat beside a dying saint, her body racked with pain, who in those final fleeting seconds summoned her last ounce of ebbing strength to whisper earth's sweetest name - Jesus, Jesus ....

And there shall be that final day when every voice that has ever uttered a sound, every voice of Adam's race shall raise in one great mighty chorus to proclaim the name of Jesus for in that day "Every knee shall bow and every tongue shall confess that Jesus Christ is Lord!"

Ah, so you see, it was not mere chance that caused the angel one night long ago to say to a virgin maiden,"His name shall be called JESUS." Jesus Jesus Jesus. You know, there is something about that name...

Thought for the Day...
Romans 14:11 For it is written, As I live, saith the Lord, every knee shall bow to me, and every tongue shall confess to God.

May this Palm Sunday be one that leads us to the Joy of the Lord!
Posted by CDGardens at 5:18 AM No comments:

Fall is a wonderful season on Hendrickson Marsh...A place where I've spent minutes and some-days hours watching different types of life in motion, or setting suns. This particular post is focused on November 11,2015.

My plans are to write many posts in retrospect because of so much I have missed - telling a story and sharing pictures that might add maybe a bit of wonder to an  existence that goes by so fast you can't get out there on your own to see... 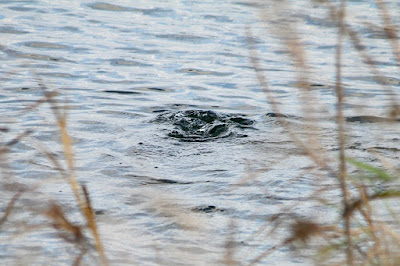 Ah! You say...a disturbed circle of water on the edge of a Marsh?!?

Well, I guess it's time to start telling you just why there happens to be a disturbed circle of water on the Edge of the Marsh.

What do you suppose could be riling up the water so much? 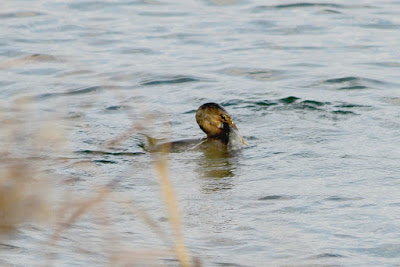 Out of the middle of the roiling water rose up a waterfowl - One of many Pied-billed Grebes taking shelter for a brief time and feeding before moving south for the winter.

I would go out on a ripple and say they had decided to do a little catch and release fishing.

You know that little Blue Gill just kept trying to roll away with every wiggle it could muster to escape the jaws of the persistent,hungry birds 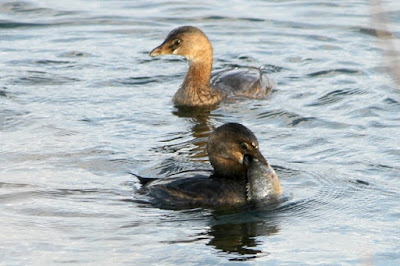 In the words of the dueling Grebes...Don't forget me! I know you caught the fish but for heavens sakes keep a hold  of the wiggler or I will certainly have lunch.

A back and forth chase across the marsh continued for a considerable amount of time in the life of a dangling fish.
Pursuit was futile - control remained with the darker of the two Grebes. 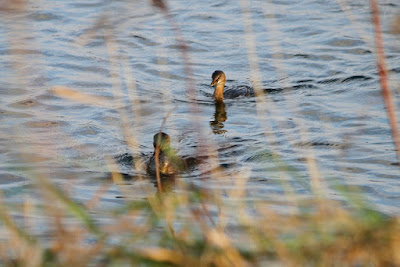 It made me wonder what type of relationship the two birds might have minus the obvious draw.

The afternoon sun was coming to an end and I didn't see other birds so clearly embroiled with a task at beak.

I will have to say the weather was certainly warm for November, allowing for an enjoyable viewing experience on my part. 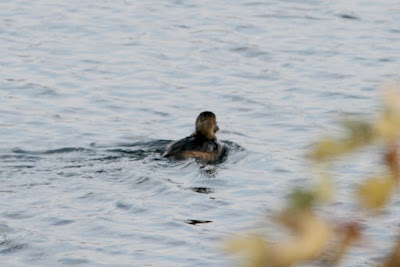 As the controlling Grebe turned tail to head in the opposite direction the follower was heard to say...Let's play  some more!

The Grebe was so compelled to make a run for it at this point - I lost sight of  whether or not it actually was able to swallow any part of the Blue Gill that had created such a feeding frenzy.

Olly, Olly Oxen Free was not going to  work in this situation...

Thank you for your visit today! All photos posted here are the property of Timber Life.


Risen , a movie now playing throughout the United States during Lent  is about the crucifixion and investigation of the resurrection of the Lord Jesus Christ according to the experiences of Tribune Clavius,a non-believer. He was given the task by the Roman Ruler Pontius Pilate to expose the perpetrators of the lie of a  Risen Messiah.  To find those who could tell him about the tomb he had sealed, now opened and empty...

My husband and I had the pleasure of spending the last two weekends viewing the movie on Sunday afternoons.  Both weekends  we, my hubby and I visited the new Cinemark XD Theater located in Altoona, IA to see the movie.

We felt the content of the movie followed the scripture and would  like to suggest to those seeking a different point of view on a life changing event to stop by your local theater. 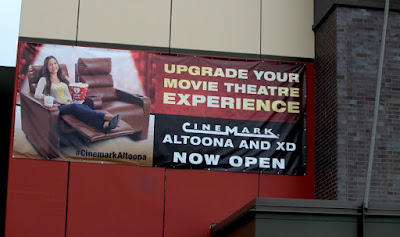 I wanted to share the movie experience with my older brother while he was available...

which happened to coincide with the second Sunday afternoon.

I would like to address the new seating arrangements that we found quite appealing. A new amenity in the theater going experience.

On our first visit we discovered that you could select your seating. They show you a diagram at the ticketing counter  for you choose the available lounges. Cinemark offers online ticket purchases with two ticket dispensers available at the Altoona location.Once inside your particular theater the aisles are lettered and the seats numbered for identification, simple and easy.

As you can see in the picture, the young woman is reclining on a lounger, much like you would get to do at home. The middle arm that includes a cup holder will fold up if you need more room and are sharing the chair with a familiar individual. It looks as though she is enjoying some tasty concession snacks.

Getting back to the movie Risen... My simple recommendation when you take time out of your busy schedule is to stop, look, and listen, to what God is trying to share through the eyes of a Roman Tribune - in search of the truth...
Posted by CDGardens at 2:51 PM No comments: