Yesterday was a one week celebration of sorts. I will share the experience with you from my point of view. 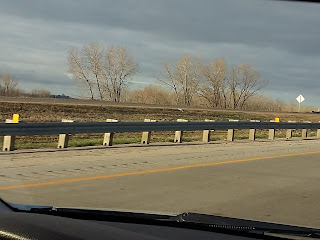 Our Easter Road Trip was moving along smoothly on Good Friday afternoon,or so we thought...That is until we reached a bridge with a big bump north of Fargo. The edge of the bridge can be seen at the far right of the picture. Time wouldn't allow for a second chance to get another shot.  Unexplainable things began to happen after we hit the bump, the car pulled hard to the right. Well, it didn't take long to decipher that we had just lost a very important part to keep everything working to power the Voisinmobile. The Serpentine Belt had successfully decided to make a split....one of those eternal vacations. 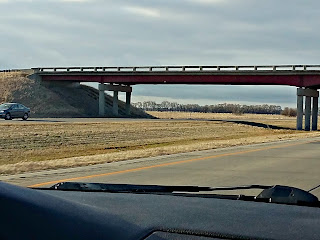 Today's Smartphones sure are a Blessing when you need to go looking for help. We called here and there in Grand Forks to try to locate the right belt. Tried the little town of Hillsboro not far to our south, but they had nothing that would match. Kyli checked in Langdon before coming to help.

We spent four and a half hours keeping this bridge company until our daughter Kyli arrived to chariot us away, back to Fargo, to pick-up a Serpentine Belt.

On our return from Fargo we attempted to fix the difficulty with the tools Kyli had gathered from the home arsenal.The method we chose brought close results,almost fixed in other words, so many times ,but after fighting a long day, getting hungry and temperatures dropping after sunset in a wind cooled location we gave into the "We'll finish it tomorrow" mode. The next morning we gathered more tools and used another method thanks to Youtube to get the job done. 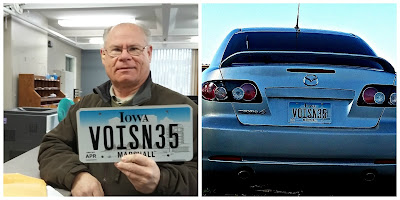 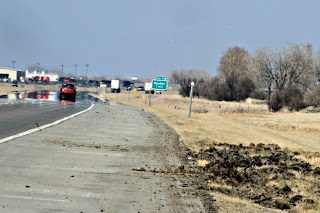 If you happened to see this guy running around in the Fargo, Grand Forks...etc...areas , I wasn't far away.

I have to smile really big. The Mazda came around Christmastime. So, I thought some vanity plates to complement the little Voisinmobile were in order.                                This is the view that kept us entertained while we waited. I spent time musing about what people were thinking as they passed by. It gave me a laugh to keep my anxiety at bay.

It was time to draw on our resources in God. This event was not one you wish on anyone...especially on a holiday weekend.

The State Trooper that stopped to see what he could do to lend aid, offered information that we might find it difficult to find stores open to get a replacement part.We had anticipated some issues with holiday and time of day. However, we were pleasantly surprised to discover the process wasn't as hard as we originally thought.

We had already started the rescue process with confidence that one way or another EVERYTHING was going to workout.

Thanks be to God the Father and His Son, Jesus Christ for everything we experienced...
Posted by CDGardens at 6:01 AM No comments: