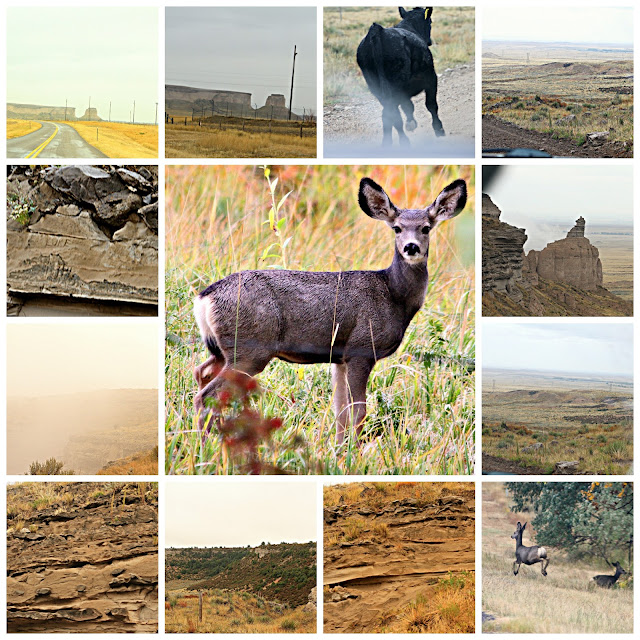 Today, I'm going to show you a little bit about the next leg of our journey last September. I was especially intrigued by the exposed rock outcroppings you see above.I like to collect things with ancient history...Wyoming is known for dinosaur bones and some of what I saw led my thoughts in that direction. It truly was another one of those We Came,We Saw,We Left moments.

Corey and I dropped down to Goshen Hole, WY. after a stop for fuel and lunch at Wheatland. We didn't go down into the hole because the road was muddy but we went far enough down a hill to see the surrounding expanse. We were met by a small group of cows that free ranged over the entrance road down into the valley. 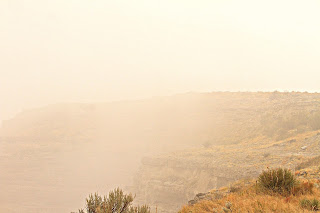 While we were sitting at the top of the hill, heavy fog developed blocking a clear view of the terrain.

It was disappointing as to how fast the curtain closed our opportunity to see where settlers passed going further west to set-up settlements or become apart of established communities. 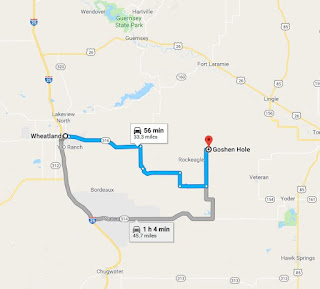 Rock formations gave us several clues to what type of life was apart of the history in the exposed substrates.

My hope had been to see Mule Deer while we were out west. I received an answer to that hope when we were headed back out of Goshen Hole to the Interstate. 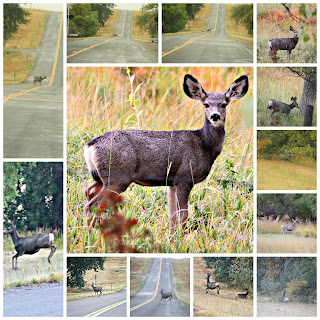 We came across a Doe and a fawn straight in front of us on the county road. They observed us on the approach,becoming uneasy and ready to bolt.

The little family ran across the road heading our direction towards what appeared to be a small creek. Corey slowed down since we didn't see any other traffic and a photo shoot began.

Eventually, we decided to get back to traveling which set the Doe fleeing back across the road to the south, while the fawn ran a little ways to the north into the trees and stopped, giving us a side-ways pose.


The next post concerning our trip will lead us from Wheatland to Hot Springs,SD.


Posted by CDGardens at 5:22 PM No comments: