Shed Hunting in the Pasture Setting 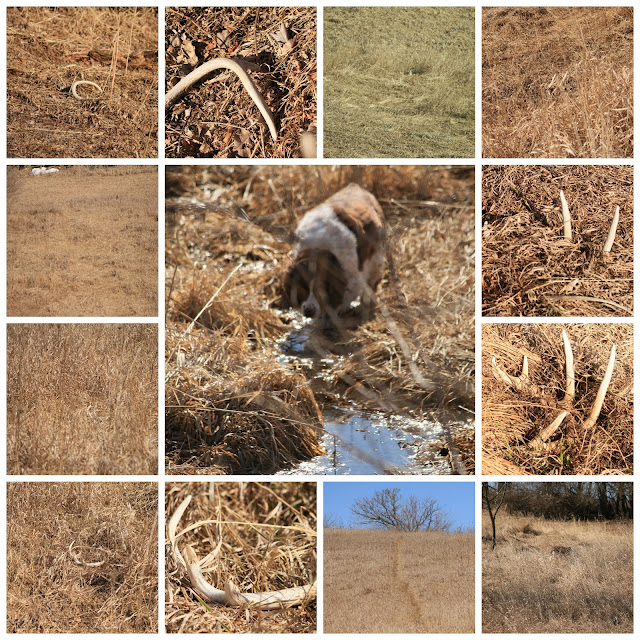 Yesterday was cool and breezy but Sadie and I were up for some Tine collecting after our trip to the Marsh to see what was sitting on the water. Sadie was free to wander to a  point. Due to her coloration she was blending into the background as you can see in the last picture on the righthand - Sadie was being stealthy in following her nose so I  did a vocal check. She raised her head to acknowledge my request for location and went back to sniffing the new scents.😉

My focus when I shed hunt now, to remember from year to year, are the in situ pictures. I believe I can fall back on them for continued education.

Upon driving back into the pasture...I had deja vu. Top left picture shows the first shed that came into view. The second picture from the left is just before I pulled the antler out of the grass.Years earlier I had sighted a shed in the same location from the opposite side of the field,of course that would be a well traveled corridor, one of the first places to look. In a setting such as pastures or tall grasses there isn't any doubt where the deer hooves cut from generation to generation,many intersecting paths.

The second picture from the right on the top row following down the rightside shows the second antler I came across from a distance. On the approach to uncover my prize I saw the exposed 4 1/2 inches of G2 and 5inches of G3; G4 and G5 weren't perceptible until I was standing right above the shed. It wasn't long until I hand pulled away the cover from last year's grass growth and put it in the pickup along with the first find of the morning.

If you follow the pictures from the second one down the leftside of my collage you will see the findings of the third and last antler yesterday. Being a bone collector for so many years has helped in knowing what to look for...if  the landscape doesn't look the same as you remember - Check-IT- Out!
The last antler was probably one I had seen before and was relocated by an animal. It had chew marks, but the condition wasn't cracked or dry. This year I took a picture of the location so I can check next year to see if it'll be in the same spot.

I need to get back outside to finish this year's Timber Life shed hunt 2018...will let you know if I find anything else.

Until then, Have a Great Day!
Posted by CDGardens at 2:00 PM No comments: