Deer Shotgun Season I opens here in Iowa today, Saturday, December 3rd, and there has been an item that keeps trying to work its way into the tangible part of my hunting paraphernalia. Sometimes we dream and scheme for a long time before we settle...again to start the process to move up in the future.

Last Saturday I decided I didn't want to go through another opener sitting in freezing rain/rain. I guess you can call me a fair weather huntress. Although, in the last 5 years I have been out in some pretty extreme cold temps with wind whipping snow -  it is becoming less desirable to do so.

Our forecast for Today: Rain. High near 38. South wind 6 to 8 mph becoming northeast. Chance of precipitation is 100%. New rainfall amounts between a half and three quarters of an inch possible.

Saturday Night: Rain and snow, becoming all snow after midnight. Low around 25. North northwest wind between 6 and 13 mph. Chance of precipitation is 90%. New precipitation amounts between a quarter and half of an inch possible. 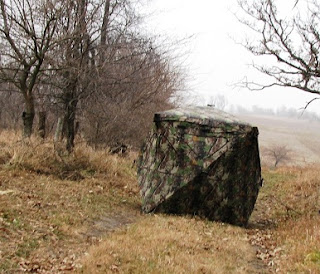 Shopping for an economical alternative to get out of the weather, that could hold two people comfortably, took me to The Sportsman's Guide. I decided on a Guide Gear Winds and Water 5-Hub Pop-Up Blind after considering an Ameristep G3 Blind. This G.G. blind appears that it will work fine for gun season, but I won't be able to use my Martin Jaguar Takedown Recurve bow from it during the Archery  seasons.

I have some concerns about this blind since I set it up Wednesday afternoon. The top can be removed for water fowl hunting which I find to be a plus - it has velcro strips and corner straps to hold it on.

However, I am only able to get three of the four sides attached on my own. My thoughts are that if I had a second person to tug it down while the I held down the opposite side it would get secured, at this point it is unsecured leaving a space for the wind to blow the elements inside. There is another thought going through my mind...if all else fails use Duct Tape.

Another concern that became apparent when I climbed inside Thursday morning was all the visible pinholes in the interior blackout finish as well as the holes created by the window stitching.

Before I purchased anything I read of others who had experienced the same difficulties with other products and their solution. They used water repellant sprays to seal the surfaces. I decided to purchase Ambush Triple-X Ground Blind Spray , not only to create a scent eliminating covering, but to add a  moisture repellant barrier.

In the future I can see maybe a different brand of  ground blind  tall enough to allow for my recurve bow in the future. Ultimately, I want to work for some stationary blinds because the deer trails don't change much over time here...they are passed on from generation to generation.

Today will most assuredly give me a product trial on the blind and protective spray.

Yesterday morning I sat watching the deer feeding and running by my ground blind. I only hope they will  be so plentiful in about an hour and a half with the weather changes as Deer Shotgun Season I opens.

Time to be off to the blind!